WHAT JUST HAPPENED….Despite all the grief she’s gotten, I continue to think that the selection of Sarah Palin as John McCain’s running mate represents the breaking of a consensual cultural barrier far more fundamental than most people realize. It’s not just that she was inexperienced (Spiro Agnew and John Edwards weren’t much more experienced than Palin when they ran for VP) but that she was — obviously, transparently, completely — uninterested in and uninformed about national policy at nearly every level. 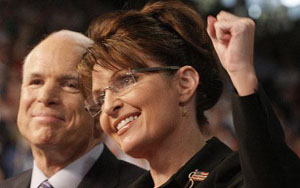 We’ve simply never seen someone so completely unmoored from the normal requirements of national office before. She was chosen purely at the level of celebrity, and an awful lot of people seemed to be just fine with that.

Unfortunately, I’ve never really been able to find the words to describe just how corrosive I think her choice was. The whole affair just left me gobsmacked. So instead I’ll turn the floor briefly over to Andrew Sullivan:

Let’s be real in a way the national media seems incapable of: this person should never have been placed on a national ticket in a mature democracy….The impulsive, unvetted selection of a total unknown, with no knowledge of or interest in the wider world, as a replacement president remains one of the most disturbing events in modern American history. That the press felt required to maintain a facade of normalcy for two months — and not to declare the whole thing a farce from start to finish — is a sign of their total loss of nerve.

….This deluded and delusional woman still doesn’t understand what happened to her; still has no self-awareness; and has never been forced to accept her obvious limitations. She cannot keep even the most trivial story straight; she repeats untruths with a ferocity and calm that is reserved only to the clinically unhinged; she has the educational level of a high school drop-out; and regards ignorance as some kind of achievement. It is excruciating to watch her — but more excruciating to watch those who feel obliged to defend her.

Andrew’s obsession with Palin was often hard to take, and I sometimes wished I could reach through the screen and strangle him whenever he started talking about Trig Palin again. Still, aside from the “clinically unhinged” crack, I agree with all of this. Disturbing hardly begins to describe what we’ve gone though with Palin over the past two months.

UPDATE: Via email, here’s an excerpt from Wolf Blitzer’s interview today with Palin:

BLITZER: Another question. What are your new ideas on how to take the Republican Party out of this rut that it’s in right now? Give me one or two new ideas that you’re going to propose to these governors who have gathered here in this hotel.

PALIN: Well, a lot of Republican governors have really good ideas for our nation because we’re the ones there on the front lines being held accountable every single day in service to the people whom have hired us in our own states and the planks in our platform are strong and they are good for America. It’s all about free enterprise and respecting the …

BLITZER: Does that mean you want to come up with a new Sarah Palin initiative that you want to release right now.

PALIN: Gah! Nothing specific right now. Sitting here in these chairs that I’m going to be proposing but in working with these governors who again on the front lines are forced to and it’s our privileged obligation to find solutions to the challenges facing our own states every day being held accountable, not being just one of many just casting votes or voting present every once in a while, we don’t get away with that. We have to balance budgets and we’re dealing with multibillion dollar budgets and tens of thousands of employees in our organizations.

Should I laugh or should I cry? I think it depends on whether Palin disappears back into well-earned obscurity over the next few months.