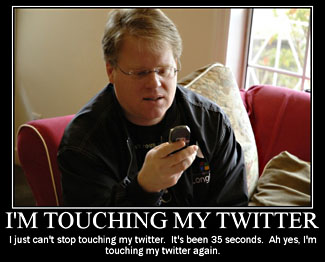 I asked Robert how much time he actually spends on those services. He monitors them all day, he said, hitting refresh over and over on both (he doesn’t use desktop clients to manage the services, and he says he doesn’t like real-time streaming feature on Friendfeed). In addition to watching all day, he says he spends at least seven hours a day, seven days a week, actually reading and responding directly on those services.

What is the cost of this addiction? Well, I’ll put his family life aside, that’s his business. But his blog has clearly suffered. He now posts only a few times a week, sometimes sporadically writing multiple posts in a day but often skipping 3-4 days in between. A year ago, Robert wrote multiple posts, every day. I used to read his blog daily, now I visit once a week.

As an aside, I’ll note how amusing it is that in the same way that people once complained that blogging crowded out “serious” long form work like books and magazine pieces, people are now starting to complain about Twitter crowding out “serious” blog posts. The worm, she does turn.

Anyway. I created a Twitter account a couple of days ago after I posted about it, since I figured that was the only way to get a better sense of what it was all about. So far, I’ve tweeted twice, so obviously I haven’t exactly embraced the form. But in a way, I think Arrington’s post captures one of the problems with Twitter: like Facebook, it doesn’t really make too much sense unless you spend a lot of time with it. It doesn’t have to be 2,555 hours a year, mind you, but both Facebook and Twitter strike me as things that are perhaps moderately useful if you use them occasionally, but potentially highly useful if you’re logged into them constantly and use them as primary tools for keeping in touch with people. That’s unlike the blogosphere, where most people pick three or four blogs to follow and read them once a day for 20 minutes or so, and it’s one of the things that makes these services hard to “get” unless you’re totally committed to them.

Of course, I could be full of hooey here. But that’s my take so far.