DENNIS BLAIR….Last month Gary Farber noted that Adm. Dennis Blair, who is Barack Obama’s choice to become our new Director of National Intelligence, has a gray spot on his record: in 1999, when he was Commander in Chief of the Pacific, he apparently cozied up with the Indonesian military at a time when they were 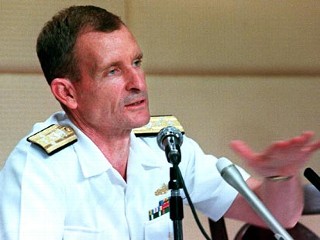 supporting terrorist militias in East Timor — and he did it in spite of instructions to tell them it was time to shut down the militias. Here’s a contemporaneous report from The Nation:

Officials say that this past April, as militia terror escalated, a top US officer was dispatched to give a message to Jakarta. Adm. Dennis Blair, the US Commander in Chief of the Pacific, leader of all US military forces in the Pacific region, was sent to meet with General Wiranto, the Indonesian armed forces commander, on April 8. Blair’s mission, as one senior US official told me, was to tell Wiranto that the time had come to shut the militia operation down….But Admiral Blair, fully briefed on [a recent massacre at] Liquiça, quickly made clear at the meeting with Wiranto that he was there to reassure the TNI chief. According to a classified cable on the meeting, circulating at Pacific Command headquarters in Hawaii, Blair, rather than telling Wiranto to shut the militias down, instead offered him a series of promises of new US assistance.

Last night Gary emailed to ask why nobody seemed to care about this. My response, essentially, was “I dunno.”

And I really don’t. In fairness, Blair doesn’t seem to have disobeyed a direct order from the president or anything. The Nation piece uses the passive voice (“was dispatched to”) in its description and a later admonition to Blair came from the State Department via the U.S. embassy in Jakarta. Blair, however, apparently felt that you catch more flies with honey than with vinegar, and chose to engage with General Wiranto in hopes of gaining his trust, rather than delivering a sharp rebuke that might have seriously damaged U.S.-Indonesian relations. In an update, for example, Gary quotes a line from a Dana Priest article in the Washington Post:

Robert Gelbard, a former U.S. ambassador to Indonesia, opposed Blair’s push to work with that country’s military in 2000, but he endorses Blair as director of national intelligence. “We had a legitimate policy disagreement. But he has a tremendous analytic mind and commands a lot of respect in Washington. His appointment comes at a time when there needs to be a critical reassessment of what the ODNI does,” Gelbard said.

These kinds of intra-government disagreements happen all the time, so it’s hard to say how big a deal this really was. And Gelbard certainly doesn’t seem to hold it against Blair. Still, it seems worth making sure Blair’s actions in Indonesia are at least on the table. So: is this a red herring or a legitimate beef? Anyone who happens to know more about what really happened here is invited to chime in in comments.