MIRROR, MIRROR….Carbon tax or cap-and-trade? Over at Gristmill, David Roberts writes that he’s had a few off-the-record conversations in DC lately and has some blunt news for progressive advocates of a carbon tax: 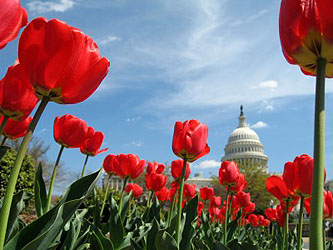 The 111th U.S. Congress is not going to pass a carbon tax. Calls for a carbon tax, to the extent they have any effect, will complicate and possibly derail passage of carbon legislation.

It’s possible that a carbon tax (and/or cap-and-dividend) bill will be introduced. One or both might even make it to a full vote, though I doubt it. But they won’t pass. If you want carbon pricing out of this Congress, cap-and-trade is what you’re getting. It follows that your energies are best spent ensuring that cap-and-trade legislation is as strong as possible.

I’m inclined to agree. Aside from technical issues, an awful lot of the pro-tax argument revolves around the political difficulty of getting a “clean” cap-and-trade bill. But while this is absolutely a reasonable concern (see Gar Lipow’s comment to David’s post for more), it’s every bit as much a concern for a carbon tax bill. In fact, my guess is that it’s more of a concern for a tax bill. After all, if there’s anything Congress knows how to do after being in business for two centuries, it’s how to muck up tax legislation for the benefit of favored industry groups.

Beyond that, though, the political picture is a little muddier. I think David is basically right: no matter what they say, conservatives are dead set against a carbon tax. But there’s a wild card here. As Jonathan Adler points out, last year’s decision in Massachusetts v. EPA requires the EPA to start regulating greenhouse gases under the Clean Air Act. So if nothing passes this year, that’s the default machinery that will be brought to bear:

Politically, I’m not sure how this will play out. One possibility is that once tax-phobic conservatives finally figure this out they’ll (reluctantly) jump on the cap-and-trade bandwagon, figuring that its market-based mechanism is a lesser evil than letting the EPA run wild. Alternatively, they might decide that taxes aren’t as bad as either the Clean Air Act or a bureaucratic cap-and-trade program, and make common cause with progressive carbon tax advocates. Or they might stick their heads in the sand and pretend that the whole thing will go away if they just refuse to support anything.

I’m not sure, though I’d guess the majority will stick to their anti-tax ways and eventually accept Door #1 if there’s a strong enough push for cap-and-trade. And there’s one other thing to add to the mix: If (like me) you think that Obama takes his campaign pledges seriously, then sometime this year he’s going to invest a huge chunk of political capital in getting a clean cap-and-trade bill passed. After all, that’s what he said he’d do. If that happens, and progressives get into a circular firing squad with themselves over it, then it means that Ann Coulter is right and liberals are idiots. Just a little something to keep in mind.

POSTSCRIPT: Just for the record, here’s the nickel argument for cap-and-trade vs. a carbon tax: (1) It sets firm limits on GHG emissions, (2) Europe is already committed to it, (3) the machinery was tested during the 90s and worked well to reduce acid rain, (4) the public will view a cap more favorably than a punitive “make ’em pay!” tax, (5) it’s politically more palatable than a tax, (6) Barack Obama supports it.

POSTSCRIPT 2: By request, here’s the nickel argument in favor of a carbon tax: (1) a tax is economically more efficient than cap-and-trade (details here), (2) it requires much less bureaucracy, (3) it can be implemented more quickly, (4) it sets a predictable price for carbon, which encourages investment in green technology, (5) it’s easier to harmonize across borders under current trade agreements.

There are also two other arguments that are widespread: (1) taxes are more transparent and less open to manipulation by special interests, and (2) taxes can be made non-regressive via rebates and dividend payment schemes. Neither of these arguments really holds water, though. Taxes are obviously open to enormous amounts of manipulation, and cap-and-trade can rebate revenues back to taxpayers the same way a tax can. On both of these scores, the two approaches are a wash.