OBAMA AND THE MEDIA….Via Mark Schmitt, John McQuaid offers this take on Barack Obama’s view of the media:

Like Bush, Obama appears to view the media agenda in fundamental conflict with his own. But now, the perceived difference isn’t ideological. It’s programmatic. Obama (correctly, I think) sees the press representing two things that are clear obstacles to his ambitious plans: official Washington and a trivia-obsessed media culture. 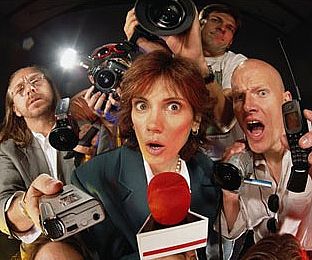 Second, the media culture: The cable maw must be fed with transient panics. Feeding frenzies and micro-scandals dominate. They fuel the chat shows, opinion columns and blogs. These faux crises and dramas, which usually pass with little consequence, can knock a presidential agenda off-stride or even destroy it.

The official Washington view McQuaid talks about is the Broderesque centrism that dominates A-list punditry. This gets a ton of attention in the blogosphere, but I elided that passage because it strikes me as the less important of the two things McQuaid talks about. After all, there always has been and always will be a mainstream pull in any political culture, and I frankly doubt that Obama sees this as something worth banging his head against. It’s like fighting the tide.

The trivia-obsessed culture of the contemporary media, however, is a different story. This is the kind of thing that Bob Somerby spends most of his time railing against, and it strikes me as much the more important of the two — partly because it’s more corrosive and partly because it’s not as inevitable. Gossip and chatter have always been part of politics, of course, but over the past decade or two, at the same time that gossip has practically taken over political journalism, it’s gotten so inane that it’s hard to tell where Access Hollywood ends and Hardball begins. It’s nearly impossible to turn on a talk show on any of the cable nets these days and hear anything that’s even remotely enlightening.

And I’ll bet McQuaid is right: it probably bugs the hell out of a guy like Obama who takes politics and policy seriously. When he said in his inaugural address that “the time has come to set aside childish things,” I wouldn’t be surprised if he was addressing the media directly.

So how does he work to change things? McQuaid warns that tightly controlling media access the way George Bush did isn’t the answer, and I agree. Instead, I’d say that he should send a consistent message about the value of serious journalism by providing the best access to the most serious journalists. Not the ones who are the most famous, or have the biggest audiences, or who agree with him the most often, but the ones who have written or aired the sharpest, liveliest, most substantive, most penetrating critiques of what he and his administration are doing. He should spar with them, he should engage with them, he should take their ideas seriously. Eventually, others will start to get the message: if you want to get presidential attention, you need to say something smart. It’s too late to for this to have any effect on media buffoons like Maureen Dowd or Chris Matthews, but you never know. It might encourage a few of the others to grow up. It’s worth a try, anyway.