A POVERTY PROGRAM THAT WORKS….Have you heard of the Harlem Children’s Zone? I first read about it only a year or two ago, and it’s a pretty fascinating anti-poverty project headed by a guy named Geoffrey Canada — 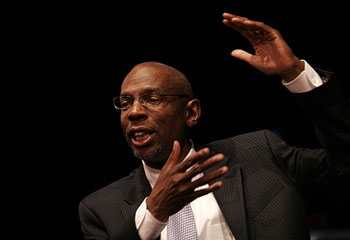 one that might well be the template for Barack Obama’s approach to inner-city poverty. In the current issue of MoJo, Paul Tough describes how it works:

Canada believes that many poor parents aren’t doing enough to prepare their kids for school — not because they don’t care, but because they simply don’t know the importance of early childhood stimulation. So the Zone starts with Baby College, nine weeks of parenting classes that focus on discipline and brain development. It continues with language-intensive prekindergarten, which feeds into a rigorous K-12 charter school with an extended day and an extended year. That academic “conveyor belt,” as Canada calls it, is supplemented by social programs: family counseling, a free health clinic, after-school tutoring, and a drop-in arts center for teenagers.

Canada’s early childhood programs are in many ways a response to research showing that the vocabularies of poor children usually lag significantly behind those of middle-class children. At the Harlem Gems prekindergarten, I watched as the four-year-olds were bombarded with books, stories, and flash cards—including some in French. The parents were enlisted, too; one morning, I went with a few families on a field trip to a local supermarket organized by the Harlem Children’s Zone. The point wasn’t to learn about nutrition, but rather about language—how to fill an everyday shopping trip with the kind of nonstop chatter that has become second nature to most upper-middle-class parents, full of questions about numbers and colors and letters and names. That chatter, social scientists have shown, has a huge effect on vocabulary and reading ability. And as we walked through the aisles, those conversations were going on everywhere: Is the carrot bumpy or smooth? What color is that apple? How many should we buy?

So far, Canada’s vision has yielded impressive results. Last year, the first conveyor-belt students reached the third grade and took their first statewide standardized tests. In reading, they scored above the New York City average, and in math they scored well above the state average.

Canada has gotten plenty of press already from the likes of Oprah and 60 Minutes, but our new president might be the biggest name convert of them all: Obama has proposed replicating the Harlem Children’s Zone in 20 cities across the country, an investment that he thinks will cost a “few billion” dollars. For comparison, this is less than 1% of what it will take to bail out the gazillionaires of Wall Street. Read the whole piece for more.