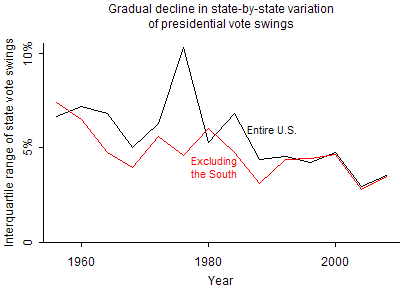 RAW DATA….Andrew Gelman presents us today with the chart on the right. Basically, it’s a measure of statewide vote changes between the parties from one election to the next. The big spike upward in 1976, for example, shows that Jimmy Carter won a whole bunch of states that had been won in 1972 by Richard Nixon.

The overall trend is down, which means that states are, in some sense, more set in their ways today than they were in the past. Red states are red states, blue states are blue states, and they just don’t swing much from election to election. This is consistent with a bunch of data that shows increasing self-segregation in the United States: communities tend to attract likeminded residents, and as the number of likeminded residents increases, they become far less likely to encounter opposing views that might swing their vote from one party to the other. So they vote the same way year after year.

There’s also a view that blames part of this trend on the increasing partisanship of the media. If you can surround yourself exclusively with Fox News and Rush Limbaugh on the one hand, or NPR and Daily Kos on the other, you’re going to become much more set in your ways. But although that seems plausible, I have my doubts: European countries have long had a more partisan media than in the U.S., but that doesn’t stop them from having big swings from election to election. In any case, my sense is that while partisan media may be on the rise in the U.S., its audience is mostly people who are already true believers. The swing voters still watch CNN and read Time magazine. Contrary data welcome, of course.