Should the federal government provide loans to college students?  Or should it let the private sector make the loans but agree to guarantee them because otherwise the private sector wouldn’t be interested?  Rep. Howard McKeon (R–Ca) thinks the latter.  Matt Yglesias, who’s apparently on a first name basis with the distinguished congressman, comments:

The interesting thing here is not just the particulars of the policy, but the bizarre view of the role of government that Howard is espousing. Rather than a debate between progressives who want the government to provide a public service and conservatives who want the service to exist just insofar as it can be supported by the private market, we have a debate where both sides agree that the service ought to exist but the right thinks it’s important that it be done in a less efficient more costly manner….You have essentially the same debate over Medicare Advantage between Democrats who want the government to provide seniors with costly medical services and 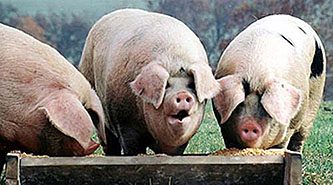 Republicans who want Democrats to provide seniors with an even more costly version of those services by bringing private insurance companies in as middlemen. It’s ludicrous.

This really does highlight the right’s frequently bizarre notion of “free markets.”  The only reason that private lenders are part of the college loan program in the first place is because the program was started in the 60s, and at the time banks were really the only institutions set up to make widescale loans.  The government didn’t have much choice except to use them as their origination arm and provide guarantees as a carrot to get them to participate.

The revolution in finance during the 70s and 80s changed all that, of course.  The government doesn’t need to pay banks to originate its loans any more than it needs to make the loans using gold bullion.  But Republicans are convinced that having Uncle Sugar subsidize loans so that Sallie Mae can make outsize profits is somehow ordained by natural law.  It must be more efficient because Sallie Mae is a private organization!  And everyone knows that federal programs are cesspools of waste and inefficiency.

But it ain’t true, and it ain’t true of Medicare Advantage either.  Sometimes the private sector does things better than the government, and sometimes it doesn’t.  In particular, when the main job at hand is cutting checks, the government is actually pretty damn efficient.  There’s not much to it these days, and with no middleman to get in the way the feds can provide money at a much lower cost than private lenders.

Bill Clinton tried to get rid of the private component of the college loan program, but he met a lot of resistance and didn’t try all that hard.  Hopefully Obama will try harder.  After all, taxpayers deserve to have their money spent as efficiently as possible, right?