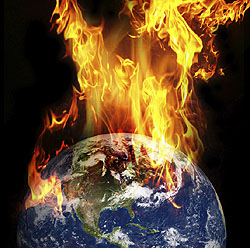 I wrote a little post yesterday rounding up some of the bad economic news from around the world (exports plummeting in Japan, Italy rescuing its banks, Eastern Europe turning into a basket case, Russian GDP down 8%, etc. etc.), but then my browser crashed and I didn’t feel like reconstructing it after I was back up and running.  But the bottom line was simple: there’s a world of economic pain out there, and economic pain frequently turns into political and national security pain too.

Unsurprisingly, it turns out that the White House is worried about the same thing, and has asked the CIA to begin preparing a daily report on the global economic crisis:

The CIA’s role in producing the report underscores the level of anxiety within the administration over how rapidly the economic downturn is spreading, as well as its potential to hobble foreign governments and trigger instability overseas.

The report, called the Economic Intelligence Brief, was launched at the request of the White House and delivered for the first time Wednesday.

[CIA Director Leon] Panetta said the document would survey major economic developments internationally and focus on how plunging markets and credit pressures are driving the decisions in nations including Russia and China.

The report covers “economic, political, leadership developments” in other countries as well as “the implications of those developments in terms of the U.S. economy,” Panetta said.

We’re not going to see pitchforks and torches in the United States, but we might in a few other countries before this is all over.  This is a smart move by Obama.

UPDATE: Along these lines, Cernig directs our attention to the recent armed mutiny among the 42,000 members of the Bangladesh Border Guards over lack of pay.  Global warming is implicated too.

Michael Klare has a much more detailed piece on this general subject over at Salon:

If you want to be grimly impressed, hang a world map on your wall and start inserting red pins where violent episodes have already occurred. Athens (Greece), Longnan (China), Port-au-Prince (Haiti), Riga (Latvia), Santa Cruz (Bolivia), Sofia (Bulgaria), Vilnius (Lithuania) and Vladivostok (Russia) would be a start. Many other cities from Reykjavik, Paris, Rome and Zaragoza to Moscow and Dublin have witnessed huge protests over rising unemployment and falling wages that remained orderly thanks in part to the presence of vast numbers of riot police. If you inserted orange pins at these locations — none as yet in the United States — your map would already look aflame with activity.

Obama’s new briefing is going to be a busy one.