Dennis Overbye has a piece in the New York Times today about “quants,” the geeks and nerds who have converged on Wall Street in recent years and tried to use mathematical models to outsmart the market and generate vast sums of risk-free cash for their employers.  I’ve read a bunch of stories in this genre, and most of them have something in common that’s always slightly puzzled me.  See if you can guess what it is based on these excerpts from Oberbye’s piece: 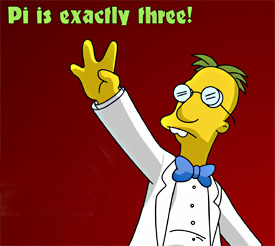 Emanuel Derman….left particle physics for a job on Wall Street….”it had the quality of physics”….forerunner of the many physicists and other scientists who have flooded Wall Street….physics Web site arXiv.org….“My Life as a Quant: Reflections on Physics and Finance”

….Asked to compare her work to physics….There are a thousand physicists on Wall Street….Physicists began to follow the jobs from academia to Wall Street in the late 1970s….Lee Smolin, a physicist at the Perimeter Institute for Theoretical Physics in Waterloo….J. Doyne Farmer, a physicist and professor at the Santa Fe Institute.

….“I think physicists should go back to the physics department and leave Wall Street alone”….Eric R. Weinstein, a mathematical physicist….Nigel Goldenfeld, a physics professor at the University of Illinois….too many physicists on Wall Street.

Did you figure it out?  What’s the deal with physicists?  They always seem to be at the center of these stories, but the fundamental tool of the quants is math.  So why not mathematicians instead of physicists?

Overbye suggests a couple of possibilities.  #1 is the glut theory: “Physicists began to follow the jobs from academia to Wall Street in the late 1970s, when the post-Sputnik boom in science spending had tapered off and the college teaching ranks had been filled with graduates from the 1960s. The result, as Dr. Derman said, was a pipeline with no jobs at the end.”

#2 is the affinity theory: “The Black-Scholes equation resembles the kinds of differential equations physicists use to represent heat diffusion and other random processes in nature. Except, instead of molecules or atoms bouncing around randomly, it is the price of the underlying stock.”

Those both sound plausible, if incomplete, so here’s another thing to think about.  Even among the number crunching set, physics has a reputation as the most aggressive, male dominated branch of geekdom: only 14% of physics PhDs are women, the lowest of any of the sciences.  (Math is pretty male dominated too, but pales compared to physics: 29% of math PhDs are women.)  If the first thing that “aggressive and male dominated” reminds you of is the big swinging dick world of high finance, give yourself a gold star.  Call this the testosterone theory: physicists are attracted to Wall Street because they like the atmosphere.

Any other theories?  Leave ’em in comments.