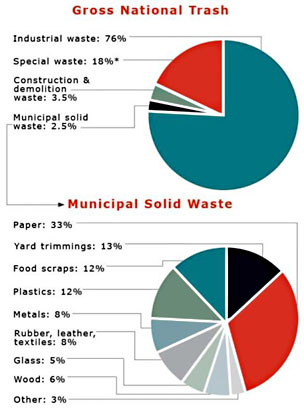 I don’t want to bum everyone out on Earth Day, so I’m going to link to Joel Makower’s article in our current edition today instead.  Two decades after writing The Green Consumer, he says he’s about ready to throw in the towel.  The problem is that when it comes to waste and recycling, it hardly even matters what individuals do.  Consumers, he says, are mere pikers:

Consider what I call “A Tale of Two Circles.” Perhaps you’ve seen the bottom circle, a pie chart containing nine slices, representing the composition of the stuff we throw out — a.k.a. municipal solid waste, or MSW. It shows that paper makes up about a third of our nation’s trash, while yard waste, food scraps, and plastics each represent about 12 percent. They are followed by smaller amounts of metals, rubber, textiles, leather, glass, wood, and other materials.

The MSW pie chart is well known in environmental circles and is the grist for a range of claims and disputes. The plastics industry, for example, uses it to “prove” that plastic bags are less of an environmental problem, at least a solid waste problem, than their paper counterparts. Aluminum, wood, and glass industries use it to make their own cases. Everyone, it seems, finds some solace in the numbers.

But there’s another circle — a much, much bigger one, totaling about 10 billion tons of waste a year, or roughly 40 times the MSW pie. This circle doesn’t have an official name — indeed, it’s virtually unknown in environmental circles, and the EPA doesn’t publish it. I’ve dubbed it gross national trash, or GNT….The thinnest slice of the pie — a minuscule 2.5 percent sliver of the whole — is municipal solid waste.