“Raise money early” is probably the most oft-repeated advice given to the 40 House Democrats singled out by party officials to receive special assistance, as they prepare to defend against potentially serious challenges in the 2010 elections. 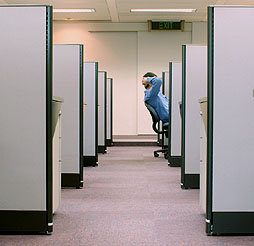 A CQ Politics analysis of campaign finance reports filed by the midnight deadline shows that these members are fast learners — they gathered an average of $266,000 in campaign receipts for the first three months of this year.

Actually, I read a great piece on exactly this subject once.  I forget where, though.  Washington Post?  New Republic?  Not sure.  But it was all about a freshman House member and the endless hours he spent down in the basement of party headquarters (or somewhere), where they have a room full of little booths furnished with nothing but a desk and a telephone.  He’d go down there every day armed with a list of phone numbers of car dealers and bank presidents and assorted other potential donors from his district, and he’d methodically work his way down the list, calling each one and cajoling them for a few hundred or a thousand bucks.  He did this every single day.  For hours.  It gave new meaning to word demeaning.

Anyway, like I said, I don’t remember where I saw it.  Which is too bad, because it was a really great piece.  If it rings a bell with anyone, let us know in comments.