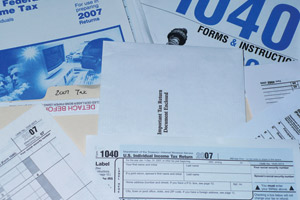 Here’s my contribution to today’s tax day festivities: an effort to get you to think about federal taxes a little bit differently than usual.  Normally, when we talk about taxes, we end up talking about percentages of people: the top 1% pay a certain amount, the bottom third pay a different amount, etc.  But this is the wrong way to look at things.  What we ought to be looking at is percentages of income.

Have your eyes glazed over yet?  Just wait!  It’s going to get worse.  But first a caveat: the numbers that follow aren’t exact.  I don’t think they’re way off the mark, but they’re the result of some rough interpolation from several different data sources.  Anyone with access to more detailed data is welcome to correct this, but in the meantime it should be close enough to give you an idea of how to look at this stuff.

But hold on.  That’s a flat tax, and I want to appeal to your native sense of fairness here.  Even most conservatives agree that taxation ought to be at least mildly progressive, so let’s make this mildly progressive.  First, let’s say that the middle quintile, almost by definition, ought to pay 20% of total taxes.  Like so:

The next quintile up ought to pay a higher share, and the quintile above that even more.  The slope of the increase doesn’t need to look like a hockey stick, but it should trend clearly upward.  Let’s say it should be 8% more for each quintile:

Question: does this seem roughly fair to you?  If you’re a die-hard flat-taxer, it won’t, but for most people, even conservatives, it ought to seem reasonable.  It’s progressive, but the slope is moderate and consistent.  So now let’s take a look at the income cutoffs that produce our five quintiles.  Here they are:

Most people are surprised at how high the income cutoffs are.  But that’s how it works out.  If you add up the incomes of every single household that makes less than $50,000 — all 50 million of them — they earn only a fifth of the total income.  If you add up the tiny number of people who make more than $300,000, they also earn a fifth of total income.  So now, instead of looking at our theoretical progressive system, let’s see the actual numbers.  Here they are:

As you can see, when you add up all federal taxes and compare it to where the money is, our system is only barely progressive at all.  The bottom quintile doesn’t do too badly, though they’re probably paying a little more than they should, but CEOs and bankers are paying only slightly more than teachers and engineers.  And if you add in state and local taxes, even this small amount of progressivity goes away.  You can come at this from a lot of different angles, but you always end up with the same answer: taken as a whole, our tax system is close to flat.  Does this seem fair to you?  It shouldn’t.

NOTE: As I said above, these numbers are rough interpolations from several sources.  The high-end income data is from Piketty and Saez, here.  The middle income aggregates and cutoffs are from Census figures, here and here.  Tax shares are from the CBO, here.