Barack Obama has said pretty clearly that he doesn’t plan to prosecute the CIA agents who tortured prisoners during the Bush era.  But what about the policymakers?  Here’s what he said at a press conference a few hours ago:

Q: You were clear about not wanting to prosecute those who carried out the instructions under [the OLC’s] legal advice. Can you be that clear about those who devised the policy?

THE PRESIDENT: […] With respect to those who formulated those legal decisions, I would say that that is going to be more of a decision for the Attorney General within the parameters of various laws, and I don’t want to prejudge that. I think that there are a host of very complicated issues involved there.

The way this question is worded, it sounds as though Obama’s answer applies to the legal team that wrote the OLC memos.  But of course that’s absurd. 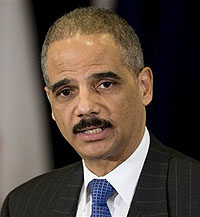 There’s no way you could prosecute the OLC lawyers without also prosecuting the guys who accepted their memos and ordered the torture carried out.  That means people like John Ashcroft, George Tenet, Dick Cheney, David Addington, and George W. Bush.

Would Eric Holder do that without Obama’s approval?  It’s hard to believe that he would.  Might he appoint a special prosecutor instead?  I doubt it.  That might delay things a bit, but the conclusion would still be foreordained: anyone with even a modest bit of integrity would conclude very quickly that President Bush and his staff did indeed authorize illegal torture of prisoners under U.S. control.

So what happens next?  I don’t know for sure, but my guess is that after a suitable waiting period an internal DOJ report of some kind will conclude that successful prosecution is unlikely and no further action should be taken.  End of story.  We’ll see.