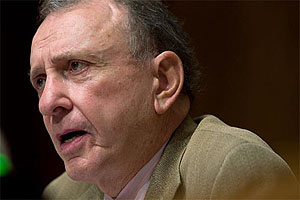 Fascinating news out of Pennsylvania today:

Pennsylvania Sen. Arlen Specter will switch his party affiliation from Republican to Democrat and announced today that he will run in 2010 as a Democrat, according to a statement he released this morning.

….”I have decided to run for re-election in 2010 in the Democratic primary,” said Specter in a statement….He added: “Since my election in 1980, as part of the Reagan Big Tent, the Republican Party has moved far to the right. Last year, more than 200,000 Republicans in Pennsylvania changed their registration to become Democrats. I now find my political philosophy more in line with Democrats than Republicans.”

That’s surprisingly forthright wording, isn’t it?  It’s hard to avoid the conclusion that Specter finds his views more in line with Democrats these days solely because there are 200,000 more of them in Pennsylvania than there used to be.  Points for honesty, I guess.

Of course, if he’s really serious about this, he could switch parties now.  And maybe announce his support for a few Democratic initiatives while he’s at it.  Interesting days.

UPDATE: Obama is “thrilled” by the news.  And who can blame him?

UPDATE 2: I think I may have misunderstood Specter’s statement.  Apparently he does plan to begin caucusing with the Democrats immediately.  I think.  Press reports seem oddly fuzzy on this point, though.

UPDATE 3: In 1950, Specter participated in the National Debate Tournament, which addressed itself to the following topic: “Resolved: That the United States should nationalize the basic nonagricultural industries.”  How newly relevant!  My father beat him, 969-964.  Take that, Ivy League.