Professional complainer Charlotte Allen takes to the pages of the LA Times today to complain about her competition: the “superstar atheists” who professionally complain about religious believers.  People like Richard Dawkins, Christopher Hitchens, P.Z. Myers, etc.

Which is fine.  Sometimes these guys are annoying.  And they certainly don’t need me to defend them anyway.  But after some fairly routine whining about how much she hates all these other whiners, Allen drops what’s rapidly becoming my all-time least favorite argument from the religious crowd:

The problem with atheists — and what makes them such excruciating snoozes — is that few of them are interested in making serious metaphysical or epistemological arguments against God’s existence, or in taking on the serious arguments that theologians have made attempting to reconcile, say, God’s omniscience with free will or God’s goodness with human suffering. Atheists seem to assume that the whole idea of God is a ridiculous absurdity, the “flying spaghetti monster” of atheists’ typically lame jokes. They think that lobbing a few Gaza-style rockets accusing God of failing to create a world more to their liking (“If there’s a God, why aren’t I rich?” 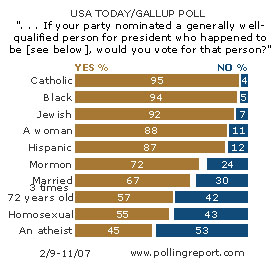 “If there’s a God, why didn’t he give me two heads so I could sleep with one head while I get some work done with the other?”) will suffice to knock down the entire edifice of belief.

Please.  This argument has become ubiquitous lately (was there some secret meeting or something?), which I suppose is a confirmation of Drum’s Law: the more inane a complaint is, the more popular it becomes.  And this one is right up there.  Aside from the fact that if you so much as scratch any of these “serious arguments” you end up with a handful of air, the fact is that atheists have addressed them in sophisticated ways since the beginning of organized religion.  But they do it in journals and convocations and formal theses and other equally tedious venues, not in bestsellers at Barnes & Noble.  Just like religious believers, who are represented in the nation’s bookstores and chat show circuits by sophisticated tomes like the Left Behind series and the collected works of Robert “Possibility Thinking” Schuller.

If you want to believe, it’s fine with me.  But contra Allen, don’t pretend that atheists can easily get elected to public office, that creationism is no big deal, or that believers have gobs of sophisticated theological arguments that atheists have never had the guts to take on.  It may be comforting, but it just ain’t true.