Josh Harkinson says the big new climate report released today by the Obama administration is no big deal because it’s largely the same as the draft report that was released by the Bush administration last year.  Technically, maybe that’s true.  But even though the report won’t directly affect either legislation or agency rulemaking, surely it matters that we have an administration that actively and willingly releases a comprehensive report like this rather than one that fumes and delays and denies for four years before finally being forced to make it public with about the same enthusiasm that most of us reserve for getting a root canal?

Besides, even though it’s primarily a review of existing literature, it’s a pretty good review, covering everything from wildfires to rainfall to hurricanes to the fact that Illinois will look like Texas by 2100 (that’s on p. 117).  Having a report this good, this comprehensive, and this authoritative may not save the planet, but it’s still a pretty worthwhile data source to have around.

What’s more, it’s a gold mine of colorful charts!  And you know I’m a sucker for that kind of stuff. So here’s your chart of the day: a 15-year history of electrical grid problems caused by increasingly extreme weather.  That’s a new one on me, so maybe it’s a new for you too.  The full report is here.

UPDATE: I picked this chart sort of randomly just because I’d never seen anything like it before.  Turns out there was a good reason for this: the increase in electrical grid problems is mostly the result of better reporting, not climate change.  Sorry about that.  Details here from Warren Meyer.

UPDATE 2: Evan Mills, who created this chart, emails to respond to Meyer’s criticism.  He points out that (1) the caption specifically says this data doesn’t demonstrate a cause-and-effect relationship, (2) the growth in weather-related incidents is not merely an artifact of better data collection, and (3) there was a larger increase in warm weather incidents than cold weather incidents.  However, regardless of whether climate change has caused any of the recent increase in grid disturbances, the data does show what may be in store for us in the future if climate change continues.  More here. 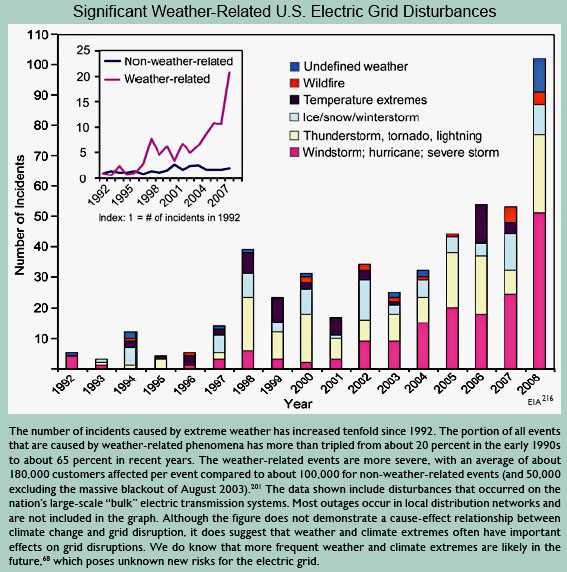