It’s hard for a Republican to compete with Mark Sanford and Sarah Palin in the weirdness sweepstakes these days, but Sen. John Ensign is working hard to grab the spotlight back. 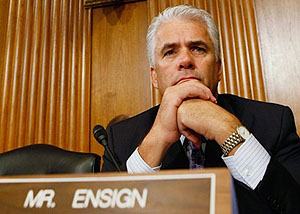 Yesterday, I thought that Ensign was doing pretty well on the comic relief front when his pal Sen. Tom Coburn, who has apparently been counseling him about how to handle his messy private life, informed reporters that he would refuse to testify about what he told Ensign.  “I was counseling him as a physician and as an ordained deacon,” he said.  “That is privileged communication that I will never reveal to anybody.” Coburn, of course, is an Ob/Gyn.

But then it got better — and less comic.  As we all know, Ensign was having an affair with Cindy Hampton, the wife of one of his former aides, and yesterday we learned that Ensign got his parents to pay $96,000 in hush money to the Hamptons.  Why $96,000?  According to Ensign’s lawyer, his mother and father gave $12,000 apiece to Cindy Hampton, her husband, Doug, and two of their children in the form of a single check.  Hilzoy piles on:

$96,000 is a lot of money. Interestingly, it is precisely the amount you can give as a gift without having to report it to the IRS, multiplied by eight: one gift of $12,000 from each parent to Ensign’s lover, her husband, and two of their children. I wonder what the IRS will make of that? I certainly hope that neither of the parents has made use of their children’s money, or done anything else to suggest that this was all one big gift split up to avoid paying gift tax, or (more likely) having to report the gift. It’s bad enough asking your parents to cough up $96,000 to cover up your indiscretions; asking them to violate the tax code and risk prison is a whole lot worse.

On the other hand, if the $96,000 was all one big gift, then I don’t have to feel so bad for the one Hampton child who mysteriously got no gift at all. (There are three. I believe the oldest is 19.) If the gifts were genuine, it might be hard to explain to that third child why his or her siblings just got $24,000 from Mommy’s lover’s parents while s/he got nothing at all, not to mention why Mommy’s lover’s parents suddenly started feeling so generous.

Obviously Sarah Palin is now going to have to do something even more bizarre than last week’s lakeside press conference if she wants people to start paying attention to her again.  I wonder what she’ll dream up?