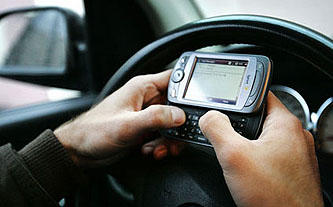 The New York Times reports today on the results of a recent study that should surprise absolutely no one:

The new study, which entailed outfitting the cabs of long-haul trucks with video cameras over 18 months, found that when the drivers texted, their collision risk was 23 times greater than when not texting.

….In the moments before a crash or near crash, drivers typically spent nearly five seconds looking at their devices — enough time at typical highway speeds to cover more than the length of a football field.

Even though trucks take longer to stop and are less maneuverable than cars, the findings generally applied to all drivers, who tend to exhibit the same behaviors as the more than 100 truckers studied, the researchers said.

The controversy about talking on cell phones during driving is at least understandable.  Most people probably figure that talking is talking, and if you can talk to a friend who’s sitting beside you in your car, then why shouldn’t you be allowed to talk to a friend on the phone too?

But texting?  That’s insane.  I’m just naive enough to be surprised that anyone in their right mind would do this in the first place, but given that they do, then of course it should be illegal.  It’s astonishing that there are still states that haven’t prohibited it.