This is apropos of nothing in particular, but I thought I’d update everybody on what I think about the Kindle after a few additional months of usage.

Here’s what happened: a couple of months I found myself at loose ends, book-wise.  I didn’t really have anything special I wanted to read, so I started browsing around on Amazon for books I might enjoy.  I found one, but it wasn’t available for the Kindle.  Then another.  And another.  Hmmph.  Then Eric Boehlert’s Bloggers on the Bus came in the mail, so I read that instead.  When I was done, I wandered over to the corner of my living room that temporarily holds the stack of books publishers send me and took one off the top.  Then the next, and the next. It was kind of fun: totally random book selection.  So over the course of a few weeks I ended up reading half a dozen real books printed on 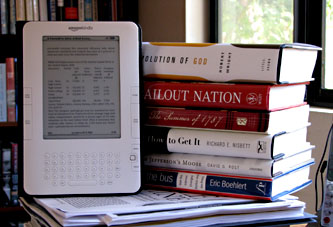 real paper: Bloggers on the Bus (excellent); In Search of Jefferson’s Moose (Jefferson stuff pretty good, internet stuff not so much); Intelligence and How to Get It (better than I expected); The Summer of 1787 (pretty good, though not really groundbreaking or anything); Bailout Nation (polemic, but mostly good polemic); and The Evolution of God (one of the less convincing books I’ve read in a while).

Then I got bored and went back to the Kindle.  This was all pretty unplanned, but what’s struck me the most in my back and forth between Kindle and paper is that the Kindle is really unsatisfactory for books that have a lot of charts and tables.  The resolution is poor; columns don’t line up right; captions break up halfway through; and both charts and tables can sometimes be pages and pages away from the text they’re connected to.

More generally: the Kindle is bad for any book in which the actual layout of the text is important.  That’s pretty obvious for something like a coffee table picture book, but it turns out to be true for nonfiction with lots of illustrations too. (I can’t imagine what it’s like reading In Search of Jefferson’s Moose on the Kindle, for instance. Between all the charts, tables, footnotes, and callouts, it must be a real mess. If anyone’s done it, let me know.)

I guess this is all pretty obvious, but a few months has driven it home more strongly.  The problem is, how do you know if a book relies on lots of illustrations?  Most fiction doesn’t, of course, but a lot of nonfiction doesn’t either.  But some does, and it’s not always obvious from the title or subject of the book.  I suppose I could look at the table of contents on Amazon and see how long the list of figures and tables is.  That’s not a perfect proxy, though, and not all books have a ToC for tables and figures anyway.  (And not all books are browsable on Amazon, either.)

POSTSCRIPT: Of course, this is all quite aside from this, which is pretty disturbing all on its own.  The future may not be quite as Kindle-riffic as I initially thought.