A few days ago I described Matt Taibbi’s recent Rolling Stone piece about Goldman Sachs as “terrible.”  And it was!  He made one outrageous assertion after another without bothering to back any of them up. 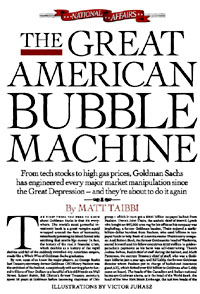 He flitted from idea to idea without developing any of them.  The whole piece was disjointed and embarrassing.

Except — it turns out there was a reason for that: the morons at Rolling Stone hadn’t actually posted Taibbi’s article.  They had only posted a short series of excerpts.  I would have known that if I’d read the introductory material very carefully, but who the hell does that?  I didn’t.  I just read what they posted, came away shaking my head, and panned it.

Well, I’ve now the read the entire piece, and I apologize.  (To Taibbi, that is, not the morons at Rolling Stone, who should have either posted the whole thing or done nothing at all.)  It’s a very good takedown of the modern financial industry and well worth reading.  There are some bits here and there that I’m not sure Taibbi gets quite right, and I do think that he made a mistake in casting Goldman Sachs as the “engineer” of every bubble in the past century rather than merely an unusually big and enthusiastic member of a predatory gang that’s been ripping us off for a long time.  This gives the piece a conspiratorial air that allows Goldman to laugh it off instead of being forced to engage with it, and that’s too bad.  They — and everyone else on Wall Street — should be forced to engage with it.

Beyond that, there are undoubtedly some mistakes in the piece, as well as places where Taibbi goes unnecessarily over the top.  I’m still not sold on carbon permits being the next big bubble, for example.  But those are quibbles.  Overall it’s a striking portait of an industry — not just a single company — of almost unbounded greed and recklessness.  Worth reading.