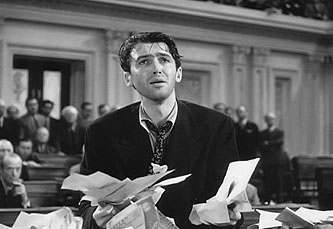 Ezra Klein argues today that since minority parties in the U.S. have universally concluded that the best strategy for regaining power is to prevent the majority from ever passing anything important, we should take another look at the filibuster:

There’s a good argument [] that eliminating the filibuster would make the Senate a more, rather than less, bipartisan institution. For many legislative efforts, it would remove the “no bill” outcome from the list of possibilities. That would leave minority legislators with one of two options. Vote against a bill that will pass, or work to change and improve and add priorities to a bill that will pass. You might imagine that if “no bill” is the first-best outcome, then a “no vote” would be the second-best outcome. But that’s not always true: Voters aren’t very interested in ineffectual opposition. They’re interested in what you’ve “done.” That can mean killing a bad bill or improving a successful bill. Voting no, over and over again, isn’t a very impressive record in any but the most partisan districts.

Actually, this is a testable theory because there’s one bill (or, rather, a package of bills) that’s passed every year on a straight majority vote: the annual budget.  No filibusters are allowed on budget resolutions, so the question is whether constructing the budget tends to be a more bipartisan process than it is with other bills.  I’m not quite sure what the right metric would be for measuring bipartisan participation in the legislative process, but surely there’s some smart political scientist out there who can propose something.  (Or already has.)  Anyone?

In any case, I continue to think the filibuster is unconstitutional.  The fact that certain types of legislation (treaties, constitutional amendments, veto overrides, etc.) specifically require supermajority votes is evidence that the framers assumed that ordinary legislation should be passed by majority vote.  Assumed it so strongly, in fact, that they never seriously considered the possibility that they had to spell it out.

Until I get the Supreme Court to agree with me, of course, this doesn’t matter.  But I still think it’s true.

UPDATE: Matt Yglesias points out that Senate rules are a political question and therefore the Supreme Court can’t rule on them.  I think that’s probably true — but I’m not absolutely sure it’s true.  In any case, I wouldn’t mind forcing them to consider the question just to be sure.  Only a senator would have standing to bring a case, probably, but how hard is it to find one rogue senator willing to take a flyer?  Especially in light of this:

I would say the key piece of evidence for Kevin’s interpretation of this is that the initial draft of the rules allowed for cloture on majority vote. Then during an 1806 revision of the rulebook, the cloture motion was scrapped on the grounds that it was never used and therefore unnecessary. Nobody was contemplating the creation of a supermajority requirement.

Like I say, unconstitutional.  The framers quite clearly intended for congressional legislation to be passed by majority rule.