Barton Gellman reports that Dick Cheney is getting ready to say what he really thinks about George Bush.  Namely that Bush went soft on him:

The two men maintain respectful ties, speaking on the telephone now and then, though aides to both said they were never quite friends. 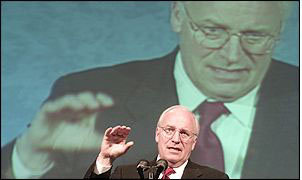 But there is a sting in Cheney’s critique, because he views concessions to public sentiment as moral weakness. After years of praising Bush as a man of resolve, Cheney now intimates that the former president turned out to be more like an ordinary politician in the end.

….The former vice president remains convinced of mortal dangers that few other leaders, in his view, face squarely. That fixed belief does much to explain the conduct that so many critics find baffling. He gives no weight, close associates said, to his low approval ratings, to the tradition of statesmanlike White House exits or to the grumbling of Republicans about his effect on the party brand.

John Hannah, Cheney’s former national security advisor, says Cheney is still obsessed with the idea of terrorists getting hold of a nuke, but:

What is new, Hannah said, is Cheney’s readiness to acknowledge “doubts about the main channels of American policy during the last few years,” a period encompassing most of Bush’s second term. “These are not small issues,” Hannah said. “They cut to the very core of who Cheney is,” and “he really feels he has an obligation” to save the country from danger.

I don’t especially blame Cheney for being worried about terrorists getting their hands on a nuke, but it’s too bad he was never willing to seriously think about what kind of foreign policy might make that least likely.  Judging from Gellman’s piece, he never will.