A recurring source of anxiety among op-ed writers lately is the fear that China is winning some sort of clean-energy race. Earlier this month, venture capitalist John Doerr and GE head Jeffrey Immelt took to The Washington Post to fret that Chinese cars were 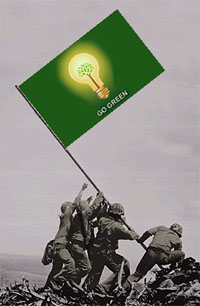 33 percent more efficient than U.S. cars, that China was investing ten times the fraction of its GDP on clean energy that the United States was, and that China was on track to generate five times as much wind power by 2020. “We are clearly not in the lead today,” they concluded. “That position is held by China, which understands the importance of controlling its energy future.”

Those pleas for stronger U.S. action have some merit….But framing these efforts as some sort of zero-sum competition, in which only the winners benefit, isn’t quite right. The entire planet will benefit from cheaper, better sources of clean energy, and it’s not as if we’ll somehow “lose” if China makes a massive push to mop up its emissions.

Sometimes there can be such a thing as too much intellectual honesty.  This is one of those times.

Look: on the global warming front, “Bangladesh will drown and California will have more wildfires in 2080” doesn’t seem to be doing the job.  So if the only way to convince Americans to get serious about this stuff is to have 4-star generals issue grim warnings about climate change being a national security threat, followed by corporate honchos ginning up some kind of “green race” with the scary Chinese, then so be it.  If this kind of thing got us to the moon, maybe it can save the planet as well.  I say we go along.

Besides, having the Pentagon worry about climate-induced global instability is a good thing.  And competing with China to produce wind turbines is way more productive than endless scaremongering about whether they’re going to build an aircraft carrier or two by 2020.  So let’s get in the spirit of things.  We must never allow the quasi-socialist Chinese hordes to overtake us in producing green technology!  Green tech is the future of our country!  Buy (green) American (stuff)!  USA!  USA!

POSTSCRIPT: Brad actually does have some serious points to make about cooperating with the Chinese on green tech.  But that’s hard to turn into a jingoistic crowd pleaser, I’m afraid.