Chris Hayes writes that after the torture and surveillance abuses of the past eight years, we need a new Church Committee to thoroughly examine the role and proper function of the intelligence community and the executive branch.  But we shouldn’t do it with Frank Church’s model in mind:

At one point Church referred to the CIA as a “rogue elephant,” causing a media firestorm. But the final committee report shows that to the degree the agency and other parts of the secret government were operating with limited control from the White House, it was by design. Walter Mondale came around to the view that the problem wasn’t the agencies themselves but the accretion of secret executive power: “the grant of powers to the CIA and to these other agencies,” he said during a committee hearing, “is, above all, a grant of power to the president.”

A contemporary Church Committee would do well to follow Mondale’s approach and not Church’s. It must comprehensively evaluate the secret government, its activities and its relationship to Congress stretching back through several decades of Democratic and 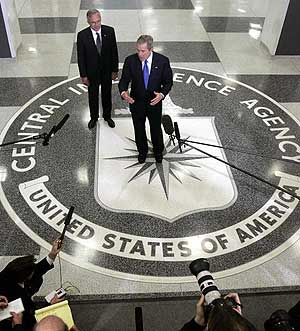 Yes.  The problem isn’t with the CIA or the NSA per se, it’s with the instructions they got from the president.  For the most part, they’ve been doing precisely what he wanted done, and they were provided with exhaustive legal opinions telling them it was OK.  Their fear is that an investigation is likely to turn exclusively into an agency witch hunt, and that’s a legitimate concern if they end up bearing the brunt of the criticism when it’s their political masters who should be bearing it instead.

Beyond those legitimate misgivings, though, lies something larger. As Chris notes, conservatives have built up a mythology in the years since the original Church Report was released that blames it for hobbling U.S. intelligence capability for decades.  There’s little to back up such a view, though, and Richard Clarke in particular has no time for it:

“What bothers me,” he says, “is the CIA’s tendency whenever they’re criticized to say, If you do your job, if you do oversight seriously — which Congress almost never does — then we’ll pout. Some of us, many, will not just pout; we’ll retire early. Our morale will be hurt.” And if morale is hurt and the agencies are gutted, they argue, the country will be exposed to attack. In other words: “If you, Congress, do oversight, then we’ll all die. Can you imagine FEMA or the agricultural department saying we’re all going to retire if you conduct oversight?” Clarke asks in disbelief.

The principle of oversight aside, the right-wing story about the committee ruining intelligence capabilities for a generation posits a golden age of über-competent intelligence-gathering that simply never existed. The activities described in the committee report, more often than not, have a kind of Keystone Kops flavor to them. “From its beginning,” says Clarke, “when [the CIA] does covert action as opposed to clandestine activity…it regularly fucks up. I remember sitting with [Defense Secretary] Bob Gates when he was deputy national security adviser, and he said, I don’t think CIA should do covert action; CIA ought to be an intelligence collection and analysis [agency].”

I like the idea of a latter day Church Committee, but mainly I like it if it has a strong focus not just on the intelligence community itself, but on the entire apparatus of oversight and executive branch secrecy.  Even the interrogators brandishing the power drills and death threats, revolting as they are, don’t deserve condemnation if the guys at the top who were quite plainly cheering them on get off without so much as a slap on the wrist.  We need to investigate the entire system, not just the hands that carried out the orders.