In the Washington Post today, Rajiv Chandrasekaran tells us why Gen. David McKiernan was so abruptly fired a few months ago as the top commander in Afghanistan:

Gates and Mullen had been having doubts about McKiernan since the beginning of the year. They regarded him as too languid, too old-school and too removed from Washington. He lacked the charisma and political savvy that Gen. David H. Petraeus brought to the Iraq war….He did not fawn over visiting lawmakers like Petraeus did in Iraq.

….”Blame General Petraeus,” a senior Defense Department official said. “He redefined during his tour in Iraq what it means to be a commanding general. He broke the mold. The traditional responsibilities 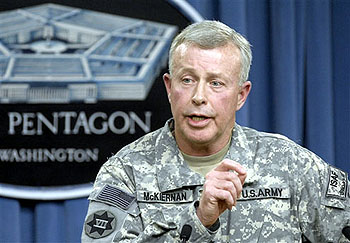 There’s more to the story than just this, and given the importance of the Afghanistan campaign it was hardly unreasonable for Gates and Mullen to install a new commander they thought was better suited to the job — even if this was based primarily on personal chemistry and even if it involved some level of unfairness to an existing commander who hadn’t done anything especially wrong.  That’s just the way it goes with top level executive positions sometimes.  What’s more, there’s evidence in Chandrasekaran’s piece that quite a few people in the Pentagon were objectively unimpressed with some of McKiernan’s planning, though he’s pretty vague about just why that was.

Still, even with all that said, it’s a little disturbing that Gates and Mullen apparently placed such a strong emphasis on “charisma and political savvy.”  That’s only a thin line away from “boot licking empty suit,” after all, and it wasn’t so very long ago that we were complaining that the Army promoted too many politically savvy generals and too few real warriors.  That’s probably not what happened here — McKiernan’s replacement, Gen. Stanley McChrystal, has a good reputation — but there’s still a slight whiff to the whole thing.  And there’s also this:

Before McChrystal left Washington, Gates asked him to deliver an assessment of the war in 60 days. Instead of summoning a team of military strategists to Kabul, McChrystal invited Washington think-tank experts from across the ideological spectrum.

….There were few revolutionary ideas in the document, but McChrystal may have received something far more important through the process: allies in the U.S. capital, on the political left and right, to talk about the need for more troops in Afghanistan — in advance of his assessment to Gates, which will probably be submitted this month.

As Spencer Ackerman points out, this is indeed politically savvy.  Whether it was the right thing to do is another question entirely.