As long as I’m writing about British sporting clubs today, how about some cricket blogging?  A few weeks ago I was emailing with Alex Massie about something or other, and along the way suggested that he should write more about cricket. 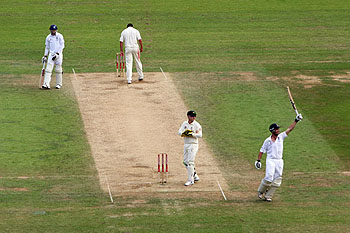 “I’m pretty much agog,” I wrote “at the idea that you have a sport that frequently ends in a draw even though it takes five days to play.”

That’s not the only reason I find myself intermittently bewitched by cricket, of course.  All sports have their own weird jargon, but cricket writing is so deliciously, Britishly impenetrable that it’s mesmerizing, sort of like those contests to write parody pomo paragraphs.  Like this: “Ian Bell, back at No3 and under the microscope, survived a torrid start to make 72 good runs, worth more than they appear, before dragging his first ball after the tea interval on to his off-stump, while Andrew Strauss batted superbly, hitting 11 fours in his 55, on the way protecting Bell from a Mitchell Johnson bombardment while he settled in.”

And the rules!  Every year or two, when some big test series comes along, I read up on the rules again and then immediately forget them.  It’s sort of like quantum mechanics: no matter how often I read about it, my brain refuses to accept that anything so eccentric can possibly be true, and promptly expels it.

So there’s that.  But back to the five-day draws.  I wrote that email to Alex after England had, via some pact with the devil or something, managed to force a draw in the first test of the Ashes last month even though Australia was clearly the better team by several light years.  But Alex says it’s the draw that makes the game what it is:

This is [] an aspect of cricket that mystifies many people, by no means all of them American. But of the three most common results — a win, a loss and a draw — it is not an overstatement to say that the draw is the most important. Because it is the draw, or more accurately the possibility of the draw, that gives the game its texture and much of its near-endless variety.

Then he starts quoting Clausewitz.  Someday, I suppose, I need to actually go watch some cricket in person with a knowledgable fan.  Only then, like Schrödinger’s cat, will I truly understand what it’s all about.