Back in 2004, when Mitt Romney was governor of Massachusetts and John Kerry looked like he had a chance of winning the presidency, the 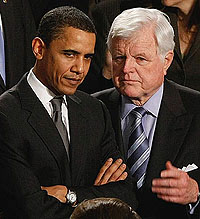 Democratic state legislature passed a bill to prevent Romney from appointing a replacement.  They didn’t want him naming a Republican to take over Kerry’s seat, after all.  So the new rules called for empty Senate seats to be filled by a special election instead.

But now it’s 2009, a Democrat is governor, and the legislature is thinking they should change the rules back and allow the governor to name a quick replacement for Ted Kennedy. Apparently they’re halfway there:

The House voted 95 to 58; the measure now goes to the State Senate, which could take up the proposal on Friday….Therese Murray, a Democrat and president of the State Senate, has remained publicly noncommittal on the proposal despite calls from the Obama administration and from Victoria Reggie Kennedy, Mr. Kennedy’s widow. The Senate, which like the House is overwhelmingly Democratic, is said to be split on the issue.

Well, look, I sympathize with Sen. Murray and the mixed feelings of her fellow Dems.  This is obviously Calvinball, after all.  But seriously, ask yourselves this: do you think the Texas legislature would hesitate even a few hours to do the same thing in reverse?  Or any other Republican state legislature?

I didn’t think so.  Now go change the law and let Deval Patrick fill that Senate seat.  Don’t be chumps.