Pakistan, as we all know, has become pretty virulently anti-American over the past few years.  Saeed Shah of McClatchy provides the latest:

The lively Pakistani media has been filled with stories of under-cover American agents operating in the country, tales of a huge contingent of U.S. Marines planned to be stationed at the embassy, and reports of Blackwater private security personnel running amuck. Armed Americans have supposedly harassed and terrified residents and police officers in Islamabad and Peshawar, according to local press reports.

Much of the hysteria was based on a near $1 billion plan, revealed by McClatchy in May and confirmed by U.S. officials, to massively increase the size of the American embassy in Islamabad, which brought home to Pakistanis that the United States plans an extensive and long-term presence in the country.

….”I think this recent brouhaha over the embassy expansion has been difficult to beat back,” said Anne Patterson, the U.S. ambassador, in an interview Thursday…. 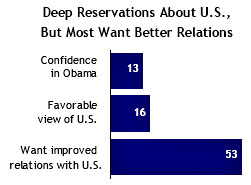 Patterson said she wrote last week to the owner of Pakistan’s biggest media group, Jang, to protest about the content of two talk shows on its Geo TV channel, hosted by star anchors Hamid Mir and Kamran Khan, and a newspaper column of influential analyst Shireen Mazari in The News, a daily, complaining that they were “wildly incorrect” and had compromised the security of Americans.

Sounds like August in America.  Less snarkily, this is a problem that you can’t really say is undercovered, since it’s gotten a fair amount of attention lately, but is nonetheless probably underappreciated: Pakistanis really, really don’t like the United States.  That’s been true for a long time, and as Shah makes clear, it’s even more true now.  In the latest Pew poll, America’s favorability rating was a whopping 16%.

I’m not sure how you operate in an environment like that.  I hope Gen. McChrystal has a few ideas to offer when his long-awaited Afghanistan assessment is released later this month.  But I’m not holding my breath.