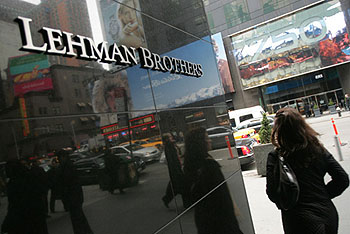 Hmmm.  Last we heard, the official story about the collapse of Lehman Brothers blamed it on pesky legalities: Barclays was ready to do a deal to acquire Lehman at the last minute, but only if they got government backstopping as part of the acquisition.  Treasury, however, didn’t have the legal authority to provide any guarantees, so there was no acquisition and Lehman went into bankruptcy.

Now, this story has always seemed a little fishy, partly because it’s changed a bit from time to time, and partly because Treasury had already provided support for the rescue of Bear Stearns, Fannie Mae, and Freddie Mac, and would provide support for AIG just a few days later.  So if they had the legal authority for that, why not Lehman?

In the Guardian today, Larry Elliott and Jill Treanor report that the real reason the deal fell through was entirely different: it was just a cockup.  The Brits thought the Americans would support the deal all along, and the Americans never made it clear they wouldn’t:

In London, the Treasury, the Bank of England and the Financial Services Authority all believed that the US government would step in with a financial guarantee for the troubled Wall Street bank. The tripartite authorities insist that they always made it clear to the Americans that a possible bid from Barclays could go ahead only if sweetened by US money.

….The UK tripartite authorities — the FSA, the Bank of England and the Treasury — had expected the US government to stand behind Lehman in the way that it had backed two crucial mortgage lenders the previous week and helped to orchestrate the bailout for Bear Stearns in March.

If the UK authorities were expecting the Americans to bail out Lehman, that means the Americans never brought up any legal hurdles.  And they surely would have mentioned it if that’s what was really standing in the way of a deal.  Right?  So what’s the real reason?

Mysteriouser and mysteriouser.  Especially since the Guardian piece has absolutely no sourcing whatsoever aside from the typically dramatic all-purpose British lead, “a Guardian/Observer investigation has revealed.”  So take this with a grain of salt — particularly since the most likely British sources have an obvious interest in making sure someone else is to blame for the post-Lehman global financial meltdown.  No one is very eager to take the blame for that, after all