After a huge gay rights rally in Washington DC, John Harwood of CNBC reported this in a segment on MSNBC:

If you look at the polling, Barack Obama is doing well with 90% or more of Democrats so the White House views this opposition as really part of the “internet left fringe” Lester. 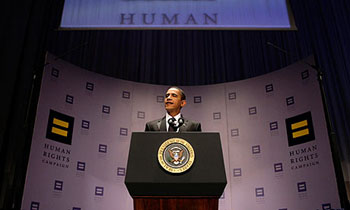 And for a sign of how seriously the White House does or doesn’t take this opposition, one adviser told me today those bloggers need to take off their pajamas, get dressed and realize that governing a closely divided country is complicated and difficult.

The blogosphere went nuts. But wait:

In an email to the Huffington Post on Monday, Harwood clarified that the quote was not meant to convey any displeasure on the part of the administration for the gay community’s public advocacy.

“My comments quoting an Obama adviser about liberal bloggers/pajamas weren’t about the LGBT community or the marchers,” he wrote. “They referred more broadly to those grumbling on the left about an array of issues in addition to gay rights, including the war in Afghanistan and health care and Guantanamo — and whether all that added up to trouble with Obama’s liberal base…”

You know, blind quotes are blind quotes.  You either take them seriously or you don’t — and there was never any reason to take this particular quote any more seriously than any other blind quote.  And sure enough, not only does this one not necessarily represent widespread opinion in the White House, it turned out not to even have anything at all to do with the LGBT community.

Still, even putting that aside, there’s a big segment of the gay community that’s pretty pissed off at Obama right now.  In one sense, I understand: they supported him, his record on gay issues is pretty modest so far, and the only way they’re going to get what they want is by keeping the pressure on him.

At the same time, some of the criticism is way over the top.  Obama doesn’t suddenly become a different person whenever he’s dealing with whatever your particular hot button issue is.  He’s the same guy all the time: cautious, tactical, organized, and prone to prioritizing things pretty carefully.  For better or worse, he’s also sensitive about learning lessons from the Clinton administration, and Clinton obviously failed miserably when he tried to force the Pentagon to accept gays early in his administration.

Obama plainly plans to avoid that trap.  Military policy toward gays is a huge hot button, it can be changed only by Congress, support isn’t there yet, and in any case Obama pretty clearly told us last year that his major priorities at the beginning of his term were going to be Iraq, Afghanistan, the economy, healthcare, financial regulation, and global warming.  That’s a massive agenda.  Given all that, there was never the slightest chance that he’d put a ton of energy into gay issues in his first year.

Instead, he’s slowly building up support for change.  He — very smartly, I think — wants to make sure that when Congress takes up gays in the military, it doesn’t look like a liberal Democrat trying to force something on the service chiefs.  He wants Gates to support it, and Mullen, and the rest of the Joint Chiefs, and maybe a few high-profile commanders and conservative opinion leaders as well.  Failure in Congress does no one any good, and like it or not, this kind of widespread support within the military is what it’s going to take to get Congress to vote to change the current policy.

For my money, Obama tends to be too cautious, tactical, and organized, and the kind of pressure he feels from the blogosphere is a good thing, regardless of what Mr. Blind Quote thinks.  But there’s still an objective reality out there, and the fact that Obama recognizes it doesn’t make him a sellout.  It just makes him human.