Here’s the latest news from the world’s biggest provider of penal services:

Caught between state funding cuts and rowdy student protests, a key committee of the University of California’s Board of Regents on Wednesday reluctantly approved a two-step student fee increase that would raise undergraduate education costs more than $2,500, or 32%, by next fall. 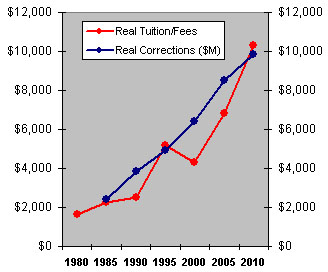 He empathized with student anger, but said it would be better directed toward state lawmakers who have cut education funding.

….The regents’ finance committee approved the new fees for UC’s undergraduates 10 to 1, with only student Regent Jesse Bernal voting no. The full board is expected to endorse the change today, along with even higher increases for students in professional schools such as law and medicine.

Yudof is right: there’s probably not much choice anymore.  Partly this is because of dumb tax and spending decisions in the past.  Partly it’s because of the recession.  And partly it’s because the prison guards union has spent the last 30 years scaring Californians into fits in order to build up the prison population.  The chart on the right shows an almost ghostly parallel: adjusted for inflation, UC tuition has gone up 5x since 1980.  During the same period, spending on corrections has also gone up 5x.  As we spend ever more on warehousing prisoners, we’re forced to make students pay ever more for their education.  The two lines track almost exactly.

We used to have the world’s greatest system of higher education and we thrived.  Now we have the world’s biggest system of penal institutions and we’re broke.  That’s the decision Californians have made over the past 30 years: more prisons and better paid prison guards, but lower taxes and less education.  (And not just higher education, either.)  It’s hard to think of a stupider allocation of resources.  But hey — at least our property taxes are capped!  Hooray!