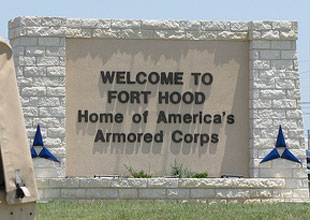 A former reader emails today to pass along a firsthand account of the shooting at Fort Hood on Thursday. It’s unedited except for paragraph breaks:

I was walking into the medical SRP building when he started firing (he never made it to the main SRP building….the media accounts are understandably pretty off right now).  He was calmly and methodically shooting everyone.  Like every non-deployed military post, no one was armed.  For the first time in my life I really wish I had a weapon.  I don’t know how to explain what it feels like to have someone shoot at you while you’re unarmed.  He missed me but didn’t miss a lot of others.  Just pure random luck.  It’s a very compressed area, thus the numbers.

I saw a lot of heroism.  So many more would have died if this wasn’t an Army post.  We’re almost all CLS trained and it made a huge difference. Cause the EMTs didn’t get there for almost an hour (they thought there was a second shooter).  I just can’t believe one of our own shot us.  When I saw his ID card I couldn’t believe it.  After he shot the female police officer he was fumbling his reload and I saw the other police officer around the corner and yelled at him to come shoot the shooter.  He did.   Then I used my belt as a tourniquet on the female officer.

I hate to tell you this but in the course of the day it became clear that it was another Akbar incident.1  (Once they convinced them the blood drenching my clothes wasn’t mine I spent the day being interviewed by the alphabet.) Akbar again.  God help us.  He was very planned.  I counted three full mags around him (I secured his weapon for a while).  Found out later that his car was filled with more ammo.

This was premeditated.  This wasn’t VBC again.  That guy snapped, not this one.  He was so damn calm when he was shooting.  Methodical.  And he was moving tactically.  The Army really is diverse and we really do love all our own.  We signed up to be shot at but not at home.  Not unarmed.  No one should ever see what the inside of that medical SRP building looked like.  I suppose that’s what VA Tech looked like.  Except they didn’t have soldiers coming from everywhere to tourniquet and compress and talk to the wounded while rounds are still coming out. 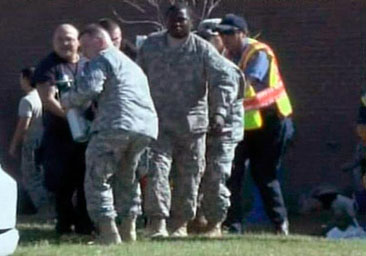 No one touched him…the shooter that is…other than to treat him.  Though I told the medic (and I’m not proud of this) that was giving him plasma that there better not be anyone else who needed it because he should be the last one to be treated.  But I had just finished holding a soldier who was critical (I counted three entry wounds) and talking to him about his children….  If the shooter had a grievance he should have taken it out on those responsible; he wasn’t shooting people he knew (media reports to the contrary).  He was just shooting anybody who happened to be present for SRP medical processing, mainly lower enlisted.

But please, no one use this politically!   The Army is not “broken”, PTSD doesn’t turn people into killers, most Muslims aren’t evil, and whether we should stay or go in Afghanistan has nothing to do with this.  I’m babbling…sorry.

1Hasan Akbar was an Army sergeant who killed two soldiers and wounded 14 others in a grenade attack in Kuwait in 2003.  He’s currently under a sentence of death.

There have been several media reports that the Fort Hood shooter yelled “Allahu Akbar!” during his rampage, but my correspondent says, “He was silent in my presence.”