Bruce Schneier on security theater vs. real security in an age of terrorism:

Security theater refers to security measures that make people feel more secure without doing anything to actually improve their security. An example: the photo ID checks that have sprung up 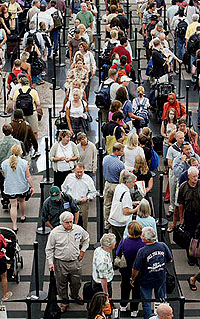 in office buildings. No-one has ever explained why verifying that someone has a photo ID provides any actual security, but it looks like security to have a uniformed guard-for-hire looking at ID cards.

….Security is both a feeling and a reality. The propensity for security theater comes from the interplay between the public and its leaders. When people are scared, they need something done that will make them feel safe, even if it doesn’t truly make them safer. Politicians naturally want to do something in response to crisis, even if that something doesn’t make any sense.

….Unfortunately for politicians, the security measures that work are largely invisible. Such measures include enhancing the intelligence-gathering abilities of the secret services, hiring cultural experts and Arabic translators, building bridges with Islamic communities both nationally and internationally, funding police capabilities — both investigative arms to prevent terrorist attacks, and emergency communications systems for after attacks occur — and arresting terrorist plotters without media fanfare. They do not include expansive new police or spying laws. Our police don’t need any new laws to deal with terrorism; rather, they need apolitical funding. These security measures don’t make good television, and they don’t help, come re-election time. But they work, addressing the reality of security instead of the feeling.

The arrest of the “liquid bombers” in London is an example: they were caught through old-fashioned intelligence and police work. Their choice of target (airplanes) and tactic (liquid explosives) didn’t matter; they would have been arrested regardless.

The whole thing is worth a read, and I’m glad Bruce included the last two paragraphs in the excerpt above.  A common problem with essays and articles about security is that they spend mountains of time criticizing pretty much everything the government has done in the years since 9/11, but precious little time explaining what should be done.  Even in this essay, Bruce only spends a few sentences on concrete suggestions.  But we really need more of that.  Like it or not, the public is always going to demand a response to terrorist events, and politicians being what they are, they’re going to provide one.  It’s up to security experts to figure out a way to make effective responses compelling enough that they become serious alternatives to security theater.

In fact, I’d like to see an entire long essay on exactly that point.  Bruce has made a pretty good start with this one.