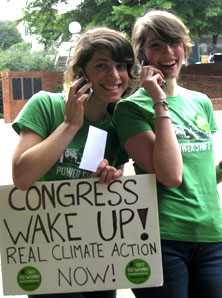 Democratic losses in Virginia and New Jersey are making Democratic congressmen nervous.  What will happen to them a year from now when they stand for reelection?

Exit polls circulating on the House floor Wednesday were even more unnerving to Democrats. The Republican candidates, the polls indicated, had received the votes of two-thirds of independent voters.

Now, as the entire House of Representatives and a third of the Senate prepare for next year’s midterm elections, some moderate Democrats are wondering whether they can afford to follow President Obama’s ambitious legislative agenda on such controversial issues as healthcare and climate change. One said the results were a “wake-up call.”

“There are going to be a lot more tensions between the White House and Congress,” predicted Rep. Jim Cooper (D-Tenn.), a member of the Blue Dog Coalition of fiscally conservative Democrats. “They’ve been under the surface so far — and they’re going to come out in the open.”

Cooper is probably just talking his own book, but even at that I don’t really get his point of view.  My take on this is pretty different: if there’s any broad lesson to be taken from Tuesday’s election (about which I remain agnostic for the moment), it’s this: independent voters are getting a little weary of endless political battles with no results.  The problem is not that Congress is trying to tackle too much, but that Congress isn’t getting anything done. That’s the wake-up call.

The answer to that is to get something done.  Pass healthcare reform, for example.  That would be (no pun intended) a huge shot in the arm for Dems of all stripes, demonstrating to skeptical voters that they can indeed govern effectively.  Ditto for financial regulation, which is a golden opportunity to harness some populist anger against the financial industry.  All Congress has to do is stand up to the finance lobby1 and put some serious constaints on Wall Street’s ability to screw people.  Think that won’t be popular?

As for Obama, he’s probably suffering a bit from his lengthy reconsideration of Afghanistan, but once he decides on a way forward that will all be promptly forgotten.  Memories are short for this kind of thing.

My guess is that the Jim Coopers of the world have everything to gain and nothing to lose by loosening up, following Obama’s lead, getting healthcare reform passed, and then following up with some meaty financial reform.  Nobody likes endless wankathons that don’t produce results, but they love results once they finally come.  Dems need to have a few.2

1Yeah, yeah, I know.  What are the odds?  I have several thousand words on exactly that subject coming in the next issue of the print magazine.