“Using energy more efficiently in buildings may be the fastest, cheapest way to substantially reduce carbon emissions in the short-term,” says David Roberts, and I think my only quibble there would be with the word may.  But how do we get people to do it?  Most people don’t 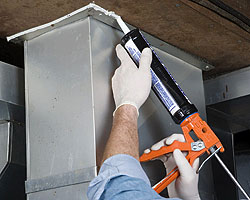 bother with this stuff even if it already makes economic sense, so putting a price on carbon and raising the price of energy will probably have only a minor impact on getting people off their butts to weatherize their houses and buildings:

Evidence indicates that the elasticity of energy demand is weirdly low.  The price signals that already exist aren’t getting a rational response. People can already save lots of money by investing in efficiency, but they aren’t doing it. They absorb a lot of price pain before they adjust their behavior….Which raises the question: why should price-based policies be our exclusive focus? Why not instead, or in tandem, try to increase elasticity of demand? If the federal government wants to get good job and economic results from its stimulus investments—and it surely does—it should not only spend the money, it should start attending seriously to the project of meliorating the market and behavioral failures in efficiency markets.

How do we remove the barriers? It turns out we know a decent amount about them but comparatively little about how to overcome them…..We’ve had three decades of cheap energy, so there’s been little reason to focus on accelerating efficiency; our know-how froze in the 1970s.

What’s clear is that getting the most out of efficiency will not only mean federal policy but state and local policy,  public-private partnerships, new financing models, new models of information sharing, and much more creative thinking. Because we know so little, there’s a lot we can learn quickly with an all-hands-on-deck effort.

Part of the problem here is simple: inertia.  Or call it laziness if you like.  It’s like the difference between opt-in and opt-out: people are far more likely to accept the status quo, whatever it is, than they are to actively seek change.  Look at me: I accidentally ordered a bunch of extra channels from my cable company a couple of months ago, but I still haven’t gotten around to cancelling them.  Maybe I never will.  Inertia is powerful.

But we also know that financing is a big part of the problem too.  Most of us don’t have $10,000 to get our homes up to snuff, and if we finance the improvements via a loan, the payments need to be low enough that we see a net savings each month.  That might require government help.  Most of us also aren’t willing to bother with this stuff if we think we might be selling our house in the next few years.  Creative financing that stays with the house, not the homeowner, can help here too.

But pure marketing is also part of the answer.  Many of us, I suspect, don’t really believe all the claims about energy audits.  Even I don’t.  Several years we bought a new refrigerator, and the energy savings on the model were plastered all over it.  What’s more, the Energy Star program has gotten lots of publicity over the past decade.  And yet, I was still sort of surprised when we got the next month’s electricity bill and it was about $20 lower than before.  In my heart, I guess I hadn’t ever really believed that all the hype was true.  But the fact is that it really has paid for itself over the past five years.

So yes, this is low-hanging fruit from an economic point of view.  But to get the most out of it, we need a lot more work on quantifying the benefits, on marketing, on behavioral prods, and on financial programs.  Plus we need whatever stuff David is promising to share in a followup post tomorrow.  It’ll probably be worth reading.