Yesterday the Office of the Actuary for Medicare released its estimate of national healthcare costs if the Senate healthcare plan is adopted.  Unsurprisingly, it shows that total spending will rise: the bill, after all, would cover about 30 million more people, so you’d expect spending to go up at first.

But there’s more to the story — although you won’t learn this by listening to Fox News.  The bill also reduces the growth in expenditures over time, and this means that within a few years we’re covering a lot of additional people for no net increase in spending.  Jon Cohn explains:

The underlying trend is in the right direction. As more time passes, it’s more likely we’ll save money. Why do I say that? It has to do with two competing trends that explain how the Medicare Actuary arrives at its bottom line [i.e., more people being covered drives spending up, but increased efficiencies drive spending down –ed.]

….According to the projection, under reform the government will reduce its spending on Medicare significantly. Establishing a commission on the cost of Medicare will reduce it further, although not by much in the early years. And a tax on the most expensive health insurance plans will curb spending in the private sector.

Over time, the cumulative effect of these changes will grow, so that the gap between what we’d spend on health care without reform and what we’d spend with it will shrink. 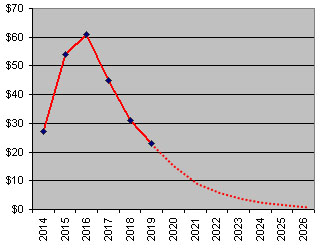 In 2019, the last year of the projection, the difference — that is, the amount of extra money our society devotes to health care — is a measly $23 billion out of more than $4.5 trillion total.

….But the actual price may be even lower, at least as time goes forward. The Medicare Actuary does not project beyond the 2019 window. But it’s reasonable to assume that if the trend holds until 2019, it will hold for a few years beyond, to the point where medical care spending really would come down.

The Medicare Actuary might not go beyond 2019, and Jon might not go beyond 2019, but I’m happy to.  The chart above starts in 2014, when the spending provisions of the bill kick in, and then extends the trend line out to 2026.  It’s based on nothing but a simple extrapolation, but it shows graphically what Jon and the Medicare Actuary talk about in words: a decade after the reforms kick in, we’d be providing healthcare to at least 30 million more people and spending no more than we would if we did nothing.  Unless you’re a Republican, that’s a pretty good deal.