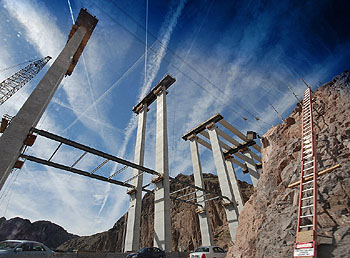 Megan McArdle writes about why a WPA-style jobs program would be unlikely to work in 21st century America:

My father was the head of a trade association for the heavy construction industry, and most of my closest relatives either work for the government, or have done so in the past.  As you can imagine, over my lifetime I’ve had a lot of conversations about government procedure and government projects.  Every so often I’ll read some description of a project out of the olden days — the battle against malaria in Panama, the handling of the Great Mississippi Flood, or the creation of the WPA — and just marvel at how fast everything used to be.  The WPA was authorized in April of 1935.  By December, it was employing 3.5 million people.   The Hoover Dam took 16 years from the time it was first proposed, to completion; eight years, if you start counting from the time it passed Congress.

Contrast this with a current, comparatively trivial project: it has been seventeen years since the Southeast High Speed Rail Corridor was established by USDOT, and we should have a Record of Decision on the Tier II environmental impact statement no later than 2010.  This for something that runs along existing rail rights of way, and in fact, uses currently operating track in many places.

….Many of the procedural hurdles involve court rulings, concerning law which Congress cannot overturn in some cases (due process), or isn’t going to (civil rights legislation, civil service protections).  The obstacles arise out of things that individually, people, specifically Democrats, like: transparency, due process, environmental care, civil rights, unionism.  Cumulatively, they are devastating to federal productivity.  But it’s hard to get much support for repealing or altering them individually — which is what you would have to do.

I think there’s a lot of truth to this.  In fact, the last time I wrote on this subject, I got into an email exchange with a guy who thought I was wrong and explained in detail exactly how big infrastructure projects could be ramped up more quickly.  But it was one of those “assume a can opener” moments.  Sure, there are ways that projects could be speeded up, but first you’d have to pass a whole bunch of laws preempting current regulations and then win a bunch of court fights over them.  Even if you could do it, it would take years.

But anyway, here’s a question: where can we find a reasonably trustworthy list of “shovel ready” infrastructure projects?  At a bare minimum this means projects that have been approved by local authorities and have already gone through the environmental impact process.  Is there such a thing?

Alternatively, how about non-construction jobs?  Building jobs are sort of a talisman in these kinds of programs, but there’s no reason that has to be the case.  So what other areas can you think of that could absorb, say, a million unskilled and semiskilled workers quickly and without impossible political pushback from a hundred different interest groups?  Let’s hear it.