Matt Yglesias points out that increasing partisanship in Congress makes it not just hard to pass domestic legislation, but nearly impossible to pass international treaties:

The dysfunctional nature of the United States Congress means that essentially all diplomatic intercourse with the American government is worthless. If you were at a G8 meeting talking regulation, why would you take the Obama administration’s positions seriously? Or at a Major Economies Forum meeting talking about climate change? Or at a UN Security Council meeting talking about multilateral nuclear disarmament?….If the people you’re negotiating with think that anything you oppose will face unanimous opposition from a minority with the power to block bills, 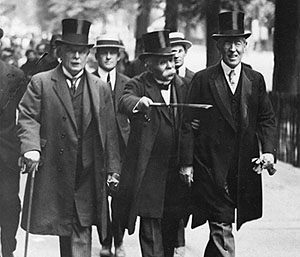 while your own party isn’t even disciplined enough to provide the leadership with consistent backing on procedural issues, then what is there really to negotiate about?

It’s a good point, but I think it’s probably overstated. The problem with things like the filibuster and the Senate hold isn’t so much that they exist, or that they’re anti-majoritarian per se, but that they’ve become routine. That really does represent a qualitative change in the way Congress operates, and it’s a change that no one, from the founders forward, ever really intended.

But for better or worse, formalizing international treaties has always been hard, and it’s hard by design. So this doesn’t represent any real change in how the government works. Foreign countries have always known that they’re at the mercy of a very difficult ratification process if they want to conclude a formal treaty with the U.S., and it’s not clear to me that minority obstruction on treaties is worse now than it’s been in the past.1

What’s more, it’s not always as bad as it sounds. Executive agreements have become much more popular in recent years, and these can be passed with 60 votes. In that sense, passing treaties has actually become easier. Beyond that, in some cases the president can simply agree to push for harmonizing rules without a treaty in place at all. Sometimes this can be done via executive order and sometimes via riders to budget bills that are passed via reconciliation. It’s not always necessary to get Congress to sign on to everything.

But an honest to God treaty? Yeah, that requires a two-thirds vote in the Senate. But it always has, and treaties have been failing for a long time because of it. Just ask Woodrow Wilson’s ghost.

1Data to the contrary welcome, of course