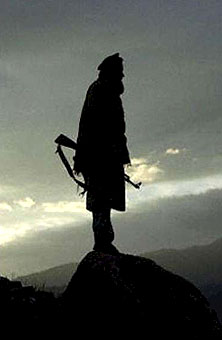 Paul Campos writes in the Wall Street Journal that he could subject LeBron James to humiliating defeat in a game of one-on-one if only they played by two special rules: the game continues until he scores a single point, and as soon as he scores he wins.

The world’s greatest nation seems bent on subjecting itself to a similarly humiliating defeat, by playing a game that could be called Terrorball. The first two rules of Terrorball are:

(1) The game lasts as long as there are terrorists who want to harm Americans; and

(2) If terrorists should manage to kill or injure or seriously frighten any of us, they win.

These rules help explain the otherwise inexplicable wave of hysteria that has swept over our government in the wake of the failed attempt by a rather pathetic aspiring terrorist to blow up a plane on Christmas Day. For two weeks now, this mildly troubling but essentially minor incident has dominated headlines and airwaves, and sent politicians from the president on down scurrying to outdo each other with statements that such incidents are “unacceptable,” and that all sorts of new and better procedures will be implemented to make sure nothing like this ever happens again.

I think that calling this a “minor” incident goes too far, but basically Campos is right: we need to stop doing al-Qaeda’s PR for it by panicking over every foiled terrorist plot. AQ’s public image — that they’re a triumphant army forever creating fear and hysteria in the decadent West — is the oxygen they live on and a key to their recruiting efforts. We should at least make them work for it, rather handing it to them on a silver platter.

But the rest of the piece takes a tack that strikes me as fundamentally wrongheaded:

It might be unrealistic to expect the average citizen to have a nuanced grasp of statistically based risk analysis, but there is nothing nuanced about two basic facts:

(1) America is a country of 310 million people, in which thousands of horrible things happen every single day; and

(2) The chances that one of those horrible things will be that you’re subjected to a terrorist attack can, for all practical purposes, be calculated as zero. (See article below by Nate Silver.)

Consider that on this very day about 6,700 Americans will die…..etc. etc.

Two things. First, this line of argument — that terrorism is statistically harmless compared to lots of other activities — will never work. For better or worse, it just won’t. So we should knock it off.

Second, even in the realm of pure logic it really doesn’t hold water. The fundamental fear of terrorism is that it’s not just random or unintentional, like car accidents or (for most of us) the threat of homicide. It’s carried out by people with a purpose. The panic caused by the underwear bomber wasn’t so much over the prospect of a planeload of casualties, it was over the reminder that al-Qaeda is still out there and still eager to expand its reach and kill thousands if we ever decide to let our guard down a little bit.

So even if you agree with Campos, as I do, that overreaction to al-Qaeda’s efforts is dumb and counterproductive, it’s perfectly reasonable to be more afraid of a highly motivated group with malign ideology and murderous intent than of things like traffic accidents or hurricanes. Suggesting otherwise, in some kind of hyperlogical a-death-is-a-death sense, strikes most people as naive and clueless. It’s an argument that probably hurts the cause of common sense more than it helps.