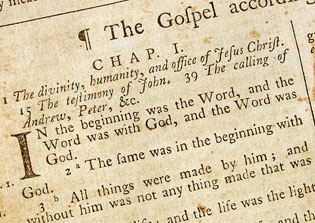 Flickr/eye2eye (Creative Commons).Over at Digby’s place, tristero highlights this section of my post on Uganda’s proposed “Kill the Gays” law:

…it’s been hard for [Andrew] Sullivan to find examples of the National Review or the Weekly Standard or the American Conservative or Commentary denouncing the Ugandan law. The writers at those magazines may disagree with Sullivan on a lot of things, but I suspect they think it’s pretty obvious to most Americans that executing gay people is wrong.

But not all conservatives think executing gay people is wrong, tristero says:

I doubt – except when I’m in a particularly unforgiving mood – that any American evangelical directly told anyone in Uganda to sponsor a “kill the gays” law. But the concept is far more common among American christianists than Nick Baumann realizes, and I have no doubt that the language those evangelicals did, in fact, use in Uganda, made capital punishment for homosexual behavior sound like a reasonable idea….

There’s a larger point here: Christianists, and the modern GOP, are far more radical than many people, no matter how well-meaning and intelligent, realize. Buffoons they certainly are, but they are very, very powerful buffoons. The Ugandan law is a direct outgrowth of radical American christianism and its high-level reach within our national politics.

There are a lot of good points in there, and the whole post is worth a read. Part of what I was trying to get at in my post is that one reason conservative writers might be reluctant to make detailed arguments against the Ugandan law is that doing so would force them to confront the more unpleasant parts of their coalition. It’s not good politics (or particularly pleasant) to be seen associating with people who need to be convinced that gays shouldn’t be executed or that slavery is bad. The reason that most people don’t realize how radical some “Christianists” are is that smart politicians keep their most controversial views and associations close to the vest. It’s not good politics if you’re known to be associated with an organization whose members (according to Jeff Sharlet) were supposedly behind the Ugandan “kill the gays” bill. In other words, there’s a reason that the Family is a secret organization.