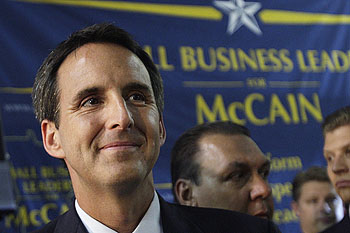 Minnesota Gov. Tim Pawlenty wants to run for president in 2012. That’s been pretty obvious for the past year, ever since the once-earnest wonk took up the death panel meme, started jabbering about the tenth amendment, and began delivering stemwinding speeches to the tea party crowd. Today he writes in Politico about his outrage over the budget deficit. Bruce Bartlett is unimpressed:

Like all Republicans these days, Pawlenty wants to have it every possible way: complain about the deficit while ignoring everything his party did to create it (Medicare Part D, two unfunded wars, TARP, earmarks galore, tax cuts up the wazoo, irresponsible regulatory and monetary policies that created the recession that created the deficit, etc.), illogically insisting that tax cuts are a necessary part of deficit reduction, and never proposing any specific spending cuts.

The only specific thing Mr. Pawlenty is capable of proposing is a balanced budget amendment to the Constitution. It’s hard to know where to begin in explaining why this is such an irresponsible idea, but I will try.

And try he does. And succeeds! Until he gets to his final paragraph:

In conclusion, Tim Pawlenty is not ready for prime time. He may think he has found a clever way of appealing to the right wing tea party/Fox News crowd without having to propose any actual cuts in spending, but it isn’t going to work. It’s too transparently phony even for them.

I don’t think anything is too transparently phony for this crowd. There’s a famous old Onion headline that goes like this: “Report: 98 Percent Of U.S. Commuters Favor Public Transportation For Others.” This is pretty much the sentiment that Pawlenty — and the rest of the Republican Party — are pandering to in the tea party movement: 98 percent of them favor spending cuts for others. Just don’t cut their Medicare or their Social Security or take away their mortgage interest tax deduction or — in Minnesota — do anything to rein in farm subsidies. Unfortunately, Pawlenty can’t think of anything sizeable to cut that would affect only “others” for a large enough definition of others. So he’s stuck. Just like his entire party is stuck, never willing to put its money where its mouth is because they know perfectly well that would mean having to make some hard decisions.

But I’m sure he’ll do fine with the tea partiers anyway. Just think of him as a slightly less robotic Mitt Romney without the Mormon baggage and you’ve got his number. There’s no reason that shouldn’t wear pretty well with these folks.