A few days ago I summarized some of the controversies swirling around the most recent (2007) IPCC climate change report and asked, “Is there anything to them? Or just a whole bunch of mud being thrown on the walls by the usual suspects?”

Yesterday the pros at RealClimate went through all the complaints and basically concluded that there’s only one actual error in the report: the claim that Himalayan glaciers would be mostly gone by 2035. “Fixing this error involves deleting 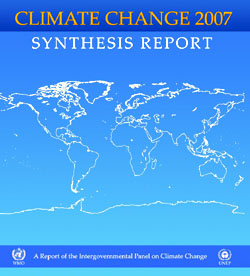 two sentences on page 493 of the WG2 report,” they say, and it was never central to the report’s conclusions anyway. So where did the whirlwind come from?

To those familiar with the science and the IPCC’s work, the current media discussion is in large part simply absurd and surreal. Journalists who have never even peeked into the IPCC report are now outraged that one wrong number appears on page 493 of Volume 2. We’ve met TV teams coming to film a report on the IPCC reports’ errors, who were astonished when they held one of the heavy volumes in hand, having never even seen it. They told us frankly that they had no way to make their own judgment; they could only report what they were being told about it. And there are well-organized lobby forces with proper PR skills that make sure these journalists are being told the “right” story. That explains why some media stories about what is supposedly said in the IPCC reports can easily be falsified simply by opening the report and reading. Unfortunately, as a broad-based volunteer effort with only minimal organizational structure the IPCC is not in a good position to rapidly counter misinformation.

….What apparently has happened is that interested quarters, after the Himalyan glacier story broke, have sifted through the IPCC volumes with a fine-toothed comb, hoping to find more embarrassing errors. They have actually found precious little, but the little they did find was promptly hyped into Seagate, Africagate, Amazongate and so on. This has some similarity to the CRU email theft, where precious little was discovered from among thousands of emails, but a few sentences were plucked out of context, deliberately misinterpreted (like “hide the decline”) and then hyped into “Climategate”.

You should read the whole thing if you’re even minimally interested in this stuff. It really does look like there’s nothing much here. Basically, we had the CRU emails, which were genuinely embarrassing even if they didn’t affect the science much, followed by the glacier debacle, and that was enough to make pretty much any other allegations look like they might be plausible too. So the anti-warming forces went to town.

So where does this leave us? As the RealClimate folks — following the lead of plenty of others — point out, even if the science of climate change hasn’t been dented, it’s pretty plain that the IPCC has been massively outgunned on the PR side of things. It’s not clear yet what the answer is to this, but either the IPCC itself needs to get bigger and more organized, or else climate scientists who deal with the press need to step up their game individually. Or both. One of their problems, of course, is that any legitimate researcher faced with an allegation of error is going to want to take the time to genuinely look into it, and that automatically limits them. There are only so many “errors” they can look into, and the ones they do investigate will take some time to adjudicate. That’s just the nature of science — and it’s why, for example, it took until yesterday for RealClimate to address all this stuff even though it’s been swirling around for a while. The debunkers, conversely, have no such limitations. They’re free to throw as much mud against the walls as they want, and their allegations can be turned into a feeding frenzy on blogs and the popular press in hours or days. There’s no need for caution.

The press itself is plainly unable to referee this stuff. The source material is highly technical and obviously far beyond their ability to understand, while the PR efforts of the debunkers are the kind of thing they’re trained to deal with in an “objective” way. It’s a recipe for disaster. One way or another, then, the climate community needs to step up its game. Kate Sheppard has some ideas here.