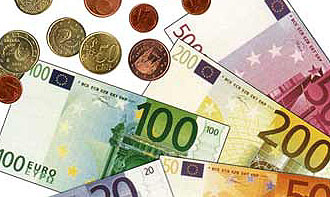 Most press coverage of the eurozone troubles has focused on Greece, which is understandable: Greece is up against the wall to a greater extent than anyone else. But the Greek economy is also very small….

Well, OK, but Lehman Brothers was also pretty small relative to the rest of Wall Street. A failure in Greece could easily have knock-on effects that start taking out other weak countries and then spreads to not-so-weak countries. Still, point taken. Moving on:

….in economic terms the heart of the crisis is in Spain, which is much bigger. And as I’ve tried to point out in a number of posts, Spain’s troubles are not, despite what you may have read, the result of fiscal irresponsibility. Instead, they reflect “asymmetric shocks” within the eurozone, which were always known to be a problem, but have turned out to be an even worse problem than the euroskeptics feared.

The rest is worth reading if this stuff seems mysterious to you. It’s very short, comes complete with some colorful charts, and gets across the main problems very succinctly. Basically, the problem is that Spain is in big trouble and needs to devalue its currency, but it can’t because it doesn’t have its own currency anymore. It has the euro, and the rest of the eurozone (i.e., Germany) doesn’t want to adopt an expansionist monetary policy just to bail out Spain and a few other countries. So they’re stuck.