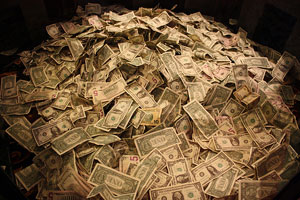 Rep. Paul Ryan (R-Wisc.) has received a lot of attention in recent days for his plan to slash the deficit. (If you haven’t yet, read Ezra Klein’s interview with Ryan.) Mostly that’s because he actually has something resembling a plan. The bulk of the “savings” from the plan come from converting Medicare to a voucher program and limiting the value of the vouchers. In other words, Ryan would change Medicare from what is essentially a single-payer plan for the elderly into a coupon program, with coupons that wouldn’t cover the full cost of your medical care. (Ryan would also essentially privatize Social Security, but he doesn’t get much in the way of savings from that.) And it’s true—if you eliminate the whole “social insurance” bit about Medicare, it gets a lot cheaper.

Now, Kevin says the plan is all “smoke and mirrors” because Ryan doesn’t say “how his spending limits will be met.” But using vouchers is actually a great way to set spending limits, if that’s what you want to do. The real problem with Ryan’s plan is that it’s the kind of plan you propose when you don’t actually have to pass a plan. Ross Douthat writes that “even if there were a politically-feasible path toward the kind of overhaul Ryan has in mind, it’s not clear how many Republican politicians would want to take it.” Even Rep. Mike Pence (R-Ind.), who appeared with Ryan at a press conference on Tuesday to discuss the plan, hasn’t embraced its proposals. The Atlantic‘s Derek Thompson has it right: “It’s a shocking budget, and the kind of thing that no party in power would ever have the cojones to propose.” It’s the “gradual extermination” of Medicare, Thompson says.

The biggest problem with Ryan’s plan is that it doesn’t actually control health care costs. It simply shifts the burden of paying for them from the public sector to individuals. Instead of the government going bankrupt trying to pay for medical care, it’ll be individuals. That’s all well and good for the rich, who might be able to pay for their own health care. But people who would have relied on Medicare are going to be out of luck. Medical costs wil rise much faster than the value of the voucher will. Ryan’s plan seems to pretend that the problem isn’t medical costs—it’s just that the government is trying to pay for them. James Kwak is good on this:

The implicit premise [of Ryan’s plan] is that we have to screw ordinary people–or at least make them bear a high degree of risk–in order to save the government budget. But what is the government budget? It’s a pile of money that we contribute and that our representatives are supposed to spend on things we can’t buy for ourselves individually. I know that those representatives make mistakes, are borderline corrupt, etc. But Medicare is exactly the kind of program that we want government to provide–a program that shifts risk from individuals to the government, and thereby the country as a whole–and that’s why it’s so popular.

Other countries manage to keep their citizens healthy at a much lower cost than we do. They don’t have to dismantle their social insurance programs to do it. Why should we?