What is there to say about the Jim Bunning situation? It just leaves me speechless. We have here a situation in which the Senate is being hijacked, literally, by the ravings of a single cranky old man against a bill that the entire Republican leadership had already agreed to. It’s pure pique, and the Republican Party is unwilling to do anything about it.

A lot of liberals have taken lately to calling the GOP nihilistic, and I’ve never bought it. Opportunistic? Sure. Brutally partisan? Sure. Vacuously unwilling to address the country’s most serious problems? Sure. Ideologically frozen in the past? Sure. But nihilistic? On the contrary, they seemed driven by a brute cunning that I might even approve of if it were my own side doing it.

But then along comes Bunning, ranting against a temporary extenstion to unemployment benefits just for the sake of…..well, no one quite knows. For the sake of whatever demons are running around in his head, I guess. It’s the kind of situation where a non-nihilistic party would finally step up and agree to rein the guy in. But that hasn’t happened. The Republican leadership has, by all accounts, done nothing, and the rest of the caucus — or enough of it, anyway — has actually rallied around Bunning. Rallied around him! They know perfectly well he’s a crackpot; they know perfectly well this is a bipartisan bill designed to provide working-class relief in the middle of a massive recession. But for guys like Bob Corker and Jeff Sessions and John Kyl it’s more important to demonstrate solidarity with a crackpot than it is to help a few people out. “I admire the courage of the junior senator from Kentucky,” said John Cornyn, apparently speaking for many. 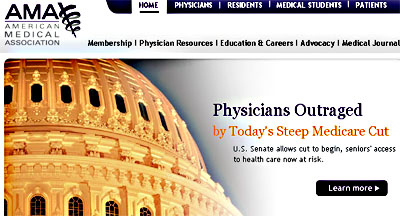 Nihilism is probably still the wrong word for this. But I guess it’s close enough for government work. Whatever it is, it’s a very deep rot in the soul of the Republican Party.

And why won’t they pay a price for this? Well, partly because Democrats aren’t willing to force them to. But it’s also partly because of how this gets played to most of the public. One of the consequences of Bunning’s objections is that Medicare payments for doctors went down 21% effective yesterday. And whose fault is this? According to the AMA, it’s the fault of the “U.S. Senate.” Here’s their press release:

“The Senate had over a year to repeal the flawed formula that causes the annual payment cut and instead they abandoned America’s seniors, making them collateral damage to their procedural games,” said AMA President J. James Rohack, M.D.  “Physicians are outraged because the cut, combined with the continued instability in the system, will force them to make difficult practice changes including limiting the number of Medicare patients they can treat.”

Not “Jim Bunning.” Not “the Republican Party.” It’s the fault of “the Senate.” This sort of thing gets played out in headlines around the country, and the result is disgust with government and disgust with Congress. But it doesn’t affect Republicans any more than Democrats until the headlines change.