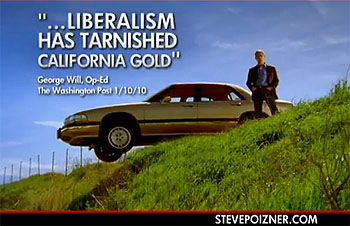 As you may know, eBay zillionaire Meg Whitman is running for governor in California. She’s been pretty assiduously avoiding reporters who might ask real questions, but she is running ads and giving speeches:

Whitman was asked by an attendee at a Redondo Beach campaign event whether as governor she would “force your attorney general to file suit” against the [healthcare] reforms, as more than a dozen attorneys general in other states have said they would.

“The answer to that is yes,” said Whitman, drawing the most sustained, and loudest, applause of the hourlong event.

This is quite a campaign we’re having. In a nutshell, nobody on the Democratic side really wants to run, so Jerry Brown is getting a free ride to an encore nomination. (Jerry Brown!) On the Republican side, we have two mega-rich candidates, Whitman and Steve Poizner, who, as near as I can tell, are basically fairly moderate conservatives. This, however, is completely unacceptable to California’s GOP, so they’ve been spending tens of millions of dollars running ads with one purpose: to position themselves as heirs to Barry Goldwater and their opponent as more liberal than Nancy Pelosi. It’s a pretty unedifying spectacle. And what makes it even worse is that despite the fact that they both have enormous trainloads of money to spend, they keep running the same damn ads over and over and over again. It’s really boring.

But that’s what it takes to win the admiration of California Republicans these days: faux pandering on idiotic questions like repealing healthcare reform, which Whitman knows perfectly well she can’t do and wouldn’t work even if she did. I can’t wait for Poizner’s response, which will probably try to paint her as a sellout for not demanding that California secede from the union if healthcare reform isn’t repealed. It’s only March, but the silly season is already well underway here.