I’m not much concerned about Elena Kagan’s allegedly nefarious ties to Goldman Sachs, which is quickly becoming the attack du jour for anyone you don’t like. As a Californian, I’ve spent the past few weeks watching Steve Poizner in heavy rotation attacking Meg Whitman as a Goldman Sachs stooge and I guess I’ve gotten a little jaded about the whole thing. Seems like much ado about nothing.

But Kagan’s academic record is another thing. Kagan was dean of Harvard Law for most of the past decade, and deans often don’t do a lot of scholarly writing. So it’s no 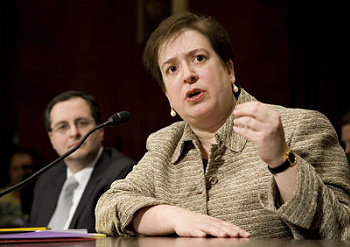 surprise that her recent law review record is a little light. But this, from Paul Campos, was a surprise:

Yesterday, I read everything Elena Kagan has ever published. It didn’t take long: in the nearly 20 years since Kagan became a law professor, she’s published very little academic scholarship — three law review articles, along with a couple of shorter essays and two brief book reviews. Somehow, Kagan got tenure at Chicago in 1995 on the basis of a single article in The Supreme Court Review — a scholarly journal edited by Chicago’s own faculty — and a short essay in the school’s law review. She then worked in the Clinton administration for several years before joining Harvard as a visiting professor of law in 1999. While there she published two articles, but since receiving tenure from Harvard in 2001 (and becoming dean of the law school in 2003) she has published nothing.

The whole piece is worth reading. I think Campos’s comparison of Kagan to Harriet Miers probably takes things too far, but I have to say that Kagan’s ability over the years to avoid expressing an opinion on almost anything is pretty remarkable. That said, though, she has expressed an opinion on at least one thing, and center-right law professor Jonathan Adler thinks that might be a problem for her:

31 voted against confirming her to be Solicitor General, and Senators are almost always more deferential to Administration picks for the Justice Department than the Courts. So it’s safe to assume that she starts approximately 30 votes in the hole. As with [Diane] Wood, there are some obvious sources of controversy, such as Kagan’s support for barring military recruiters at Harvard Law School because of “don’t ask, don’t tell,” and the subsequent Solomon Amendment litigation.

….SG Kagan’s record could produce additional flashpoints that Judge Wood would not have to worry about — flashpoints that will produce stories long after the “day one” profiles. For example, if Kagan is nominated Senate Republicans will demand access to executive branch records from her time in the White House counsel’s office during the Clinton Administration (much as Senate Democrats demanded such documents for John Roberts and others). There is already speculation about what such a document dump could reveal, and there are almost certain to be surprises of one sort or another.

Diane Wood would get attacked too, of course, but Adler argues that her vulnerabilities — “a handful of opinions concerning abortion and religious liberty, and perhaps a criminal case or two” — are strictly “day one” problems. I agree. Everyone knows that Wood is liberal, and everyone knows that Obama isn’t going to nominate someone who isn’t a liberal. So although a few liberal rulings will provoke the usual outcry from the usual suspects, it just isn’t likely to have much traction. There are no surprises there. With Kagan we can’t be sure of that.

Now, I agree with Adler that both Wood and Kagan are likely to be confirmed, so this is hardly a definitive reason to reject either one. But Kagan does strike me as a bit riskier, and it’s hard to figure out why you’d nominate someone who’s both riskier and has such an aggressively ambiguous record on almost everything of importance. This is one of the main reasons why I think Obama would be better off nominating Diane Wood, who has a clear and invigorating record on a wide variety of progressive issues and boasts a highly respected academic background.

All that said, it’s also true that personal recommendations from people you trust are meaningful. The fact that Kagan worked in both the Clinton and Obama White Houses is meaningful, and endorsements from people like Larry Lessig are meaningful. What’s more, I’ve long believed that presidents deserve a substantial amount of deference in their nominations. Kagan is pretty obviously qualified in all the usual ways, so if Obama nominates her I’m not going to go ballistic over it.

And I predict that he will. Why? Because Obama seems to have almost a sixth sense for doing things that annoy me just a little bit. On most issues he’s roughly in the same ballpark as me, but in the end he always seems to end up just a notch to my right. Not enough to really piss me off, but enough to keep me perpetually just a little disappointed. A Kagan nomination would fit that pattern perfectly. So I’m bracing myself for yet another mild disappointment.