So I’ve been reading more about cloud computing and just generally thinking about the whole thing, and for some reason I’ve gotten sort of intrigued with it. Here in the U.S., our web infrastructure sucks so badly that I don’t think it’s really very feasible 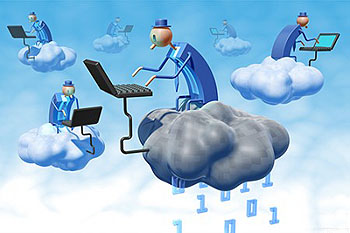 as a full-time lifestyle yet, but it’s getting there. Eventually we’ll have routine access to, say, 10mbs wireless everywhere and 100 mbs in most places, and then it becomes a real option.

As part of all this, I’ve been trying to figure out if I can do away with all desktop applications except my browser. A few years ago this wouldn’t have been anywhere near feasible, but I’m not much of a power use these days and my needs are simpler. (Plus browser-based apps have gotten a lot better.) So I started simplifying, and to my surprise it turned out to be easier than I thought it would be. My email is already browser-based since I use Opera, and of course my RSS feeds are too (Google Reader). Google Maps replaced my mapping software a long time ago. I turned off TweetDeck and loaded HootSuite instead. I got rid of Word and Notepad and set up Google Docs. I started using Pixlr as a replacement for Photoshop. I’m still saving documents locally, but changing that would obviously be an easy task.

So how’s it working out? I’ve only been doing this for a few days, but it’s (a) suprising how easy it was and (b) frustrating that the web apps all have some drawbacks. HootSuite basically works fine, but its use of real estate is atrocious and it doesn’t have an option to pop up a window when new tweets come in. But maybe that’s a crutch I don’t need anymore. We’ll see. Google Docs is Google Docs, and basically works fine — though it lacks features here and there that you get in Office. And if all I want to do is to make a quick note, it takes a lot more clicks and a lot more time than just powering up Notepad for a few seconds. Pixlr is an amazing program, built to look and act like Photoshop and with a pretty stunning array of features. I’m sure it lacks some of Photoshop’s advanced features, but so far I haven’t found a single thing I need that it doesn’t do — and one or two minor things that it does better. Unfortunately, it’s Flash-based. As a demonstration of what you can accomplish with Flash it’s pretty amazing, but hey — it’s still Flash. So it crashes my browser whenever I save an image. And it has no access to the clipboard. Until I figure out what’s going on, I’ll have to stick with Photoshop. [Update below.]

All in all, I was surprised at just how competent all this stuff was. Pixlr, in particular, is pretty stunning if I could just figure out how to keep it from crashing. But it looks to me like anyone who’s not a power geek — and maybe even the geeks — could use free online apps for a surprising amount of their daily routine. At this point, then, I guess the next step is to check into online storage. I’ve had an ADrive account forever, but I really only use it when I need to send friends files that are too large to email. Ideally, especially while I’m still experimenting, I suppose I’d like some way to replicate my directory structure somewhere and save files simultaneously both locally and remotely when I work on them. I’m not sure yet if anyone provides a simple way of doing that.

Right now I’m just playing around, trying to see how well life with just a browser works. I’m so deskbound that this doesn’t matter much in a practical sense, but if I were a mobile user it would. So how’s all this stuff working out for you road warriors out there?

UPDATE: Hey, pretty good tech support from the Pixlr creator! Turns out I needed to install a new version of the Flash viewer, and after that everything worked fine. So I’ll be road testing it for the next week or so after all.