During his confirmation hearings for the Supreme Court in 2005, John Roberts assured senators that his job as a judge was merely “to call balls and strikes.” It was a familiar, homey allusion, deliberately designed to suggest that ideology didn’t — or anyway, shouldn’t — play a role in deciding cases. He would be interpreting the plain meaning of the law, not making up his own.

But as fond as conservatives are of this kind of imagery, it’s mostly a myth. Recently the Constitutional Accountability Center took a look at Supreme Court rulings during the Roberts era, but instead of looking at hot button social issues they looked at the kinds of rulings that, although they get less attention, actually take up the bulk of the court’s time: those involving business and corporate law. The results were pretty startling.

A good guidepost to these rulings is the position taken by the United States Chamber of Commerce, which bills itself as the “voice of business.” Roberts’s record? In the past five years he’s sided with the Chamber 70% of the time. In close cases he’s sided 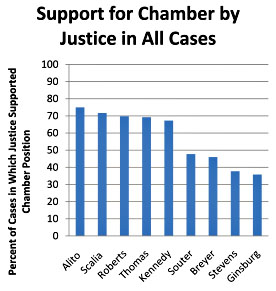 with the Chamber a stunning 90% of the time. As an umpire, it turns out that if you’re filing a case against the business community Roberts has declared a strike zone only a few inches wide.

The kinds of regulatory issues involved in these cases are, in the long run, more important than all but the most explosive culture war cases. They include things like Citizens United, which allowed corporations to spend unlimited sums in political campaigns; Ledbetter v. Goodyear, which effectively eliminated the right to sue for race or gender pay discrimination; and Exxon v. Baker, which slashed the damage award in the Exxon Valdez oil spill case by 80%. And those are only the big ones. You can add in hundreds of other, smaller cases that have slowly but steadily chipped away at the right to hold corporations accountable over the past three decades.

And what about liberals on the court? Well, Souter and Breyer sided with the Chamber nearly half the time, and even Stevens and Ginsburg favored business interests more than a third of the time. The lesson here is that, contrary to what conservatives want everyone to think, they don’t just “call balls and strikes” or “rely on the plain meaning of the constitution.” Ideology matters. In fact, when it comes to business issues, conservative judges make far more fervent ideologues than liberals. Caveat emptor.

UPDATE: Want to read more about the whole “balls and strikes” analogy? Sure you do! Check out Aaron Zelinsky’s Yale Law Journal essay, “The Justice as Commissioner: Benching the Judge-Umpire Analogy,” where he says Supreme Court justices aren’t like umpires, they’re more like the commissioner of baseball.